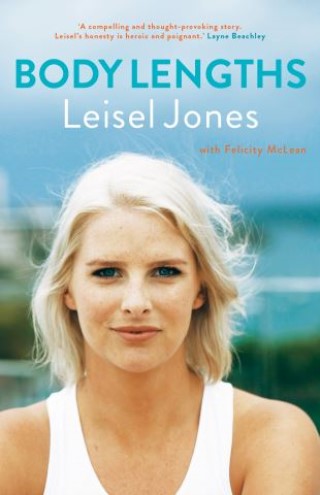 From the moment I am born, I am like no-one else around me. I am a fish out of water. Even in the pool.

Leisel Jones is rightly regarded as one of the greatest breaststrokers ever. At just fifteen, she won two silver medals at the Sydney Olympic Games in 2000; she went on to win gold at Athens and Beijing, and at London 2012 became the first Australian swimmer to compete at four Olympics.

For the first time, Leisel candidly describes what it’s like to be thrust into the limelight so young. She reveals the constant pressure she was under – from coaches, from the media and from herself – to be perfect. Despite the highs of her swimming stardom, she suffered depression, and at one time planned to take her own life. In London, criticised in the media for her weight, and appalled by the bullying and dysfunction in the Australian swim team, Leisel nevertheless handled herself with great composure. She has emerged with maturity and good humour, having finally learnt how to be herself and live with confidence.

Body Lengths is the inspiring story of an Australian sporting hero, told with humour, optimism and style.

‘There were times when it wasn’t easy for Leisel, but she came through as one of the greatest swimmers of all time.’ —Ray Warren

‘Swimming, success and sadness - all wrapped up in the bio of one of our greatest athletes.’ —Cosmopolitan

‘Gripping, confronting and important, Body Lengths is a masterfully told story that will leave you with a disturbing new look at elite sport and at life. If you are not afraid of dark places – of seeing the flaws that exist in us all – you won’t be able to put the book down.’ —Crossing the Line

‘Many autobiographies claim to be no holds barred, but we’re pressed to think of many that are as searingly honest as Leisel Jones’ account of her struggles with isolation and suicidal anguish. One of Australia’s greatest Olympic swimmers is known to the world for her sunny public persona and athletic grit, but outside of the pool and limelight, her path hasn’t been easy. Body Lengths exposes some of the darker aspects of competitive sport, but what stuck with us was Jones’ courage to speak her truth – as well as her disarming humility and passion.’ —iBooks, Best Books of October

‘Lethal Leisel was an incredible role model and an inspiration for my generation. She epitomises the Olympic dream!’ —Sally Fitzgibbons

‘Leisel gives a fascinating and candid account of her time as an elite swimmer and what it was like to be thrust into the limelight at such a young age She writes engagingly of the personal high and low points, the relationships and friendships, and the huge demands of maintaining her fitness and training over the years.’ —The City

Leisel Jones retired from swimming in 2012 as the winner of three Olympic gold medals, and many Commonwealth and world championship medals. She was a commentator at the 2014 Commonwealth Games, and in 2015 was inducted into the Sports Hall of Fame.

Felicity McLean is the author of several books. She has written for the Daily Telegraph, the Courier Mail, the Big Issue and more.

Leisel Jones: Leisel Jones retired from swimming in 2012 as the winner of three Olympic gold medals, and many Commonwealth and world championship medals. She was a commentator at the 2014 Commonwealth Games, and in 2015 was inducted into the Sports Hall of Fame.Felicity McLean is the author of several books. She has written for the Daily Telegraph, the Courier Mail, the Big Issue and more.