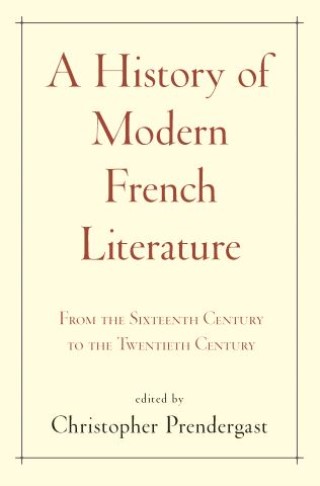 A History of Modern French Literature

From the Sixteenth Century to the Twentieth Century

An accessible and authoritative new history of French literature, written by a highly distinguished transatlantic group of scholars

This book provides an engaging, accessible, and exciting new history of French literature from the Renaissance through the twentieth century, from Rabelais and Marguerite de Navarre to Samuel Beckett and Assia Djebar. Christopher Prendergast, one of today's most distinguished authorities on French literature, has gathered a transatlantic group of more than thirty leading scholars who provide original essays on carefully selected writers, works, and topics that open a window onto key chapters of French literary history. The book begins in the sixteenth century with the formation of a modern national literary consciousness, and ends in the late twentieth century with the idea of the "national" coming increasingly into question as inherited meanings of "French" and "Frenchness" expand beyond the geographical limits of mainland France.

Christopher Prendergast: Christopher Prendergast is professor emeritus of French literature at the University of Cambridge and a fellow of King's College and the British Academy. He is the general editor of the Penguin Proust, and his many books include Mirages and Mad Beliefs: Proust the Skeptic (Princeton).