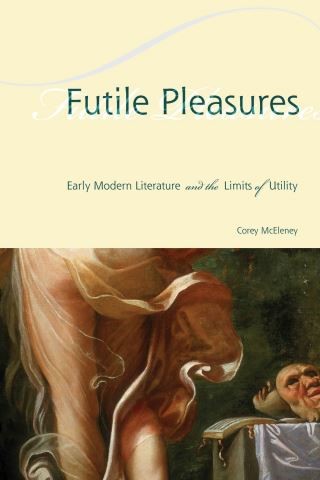 Early Modern Literature and the Limits of Utility

Against the defensive backdrop of countless apologetic justifications for the value of literature and the humanities, Futile Pleasures reframes the current conversation by returning to the literary culture of early modern England, a culture whose defensive posture toward literature rivals and shapes our own.

During the Renaissance, poets justified the value of their work on the basis of the notion that the purpose of poetry is to please and instruct, that it must be both delightful and useful. At the same time, many of these writers faced the possibility that the pleasures of literature may be in conflict with the demand to be useful and valuable. Analyzing the rhetoric of pleasure and the pleasure of rhetoric in texts by William Shakespeare, Roger Ascham, Thomas Nashe, Edmund Spenser, and John Milton, McEleney explores the ambivalence these writers display toward literature’s potential for useless, frivolous vanity.

Tracing that ambivalence forward to the modern era, this book also shows how contemporary critics have recapitulated Renaissance humanist ideals about aesthetic value. Against a longstanding tradition that defensively advocates for the redemptive utility of literature, Futile Pleasures both theorizes and performs the queer pleasures of futility. Without ever losing sight of the costs of those pleasures, McEleney argues that playing with futility may be one way of moving beyond the impasses that modern humanists, like their early modern counterparts, have always faced.