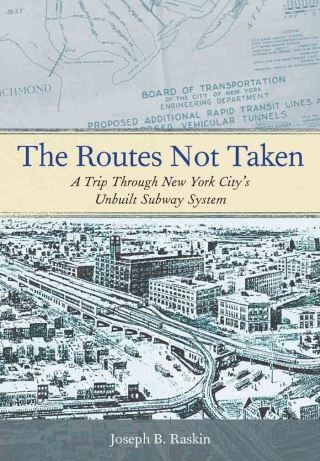 The Routes Not Taken

Robert A. Van Wyck, mayor of the greater city of New York, broke ground for the first subway line by City Hall on March 24, 1900. It took four years, six months, and twenty-three days to build the line from City Hall to West 145th Street in Harlem. Things rarely went that quickly ever again. The Routes Not Taken explores the often dramatic stories behind the unbuilt or unfinished subway lines, shedding light on a significant part of New York City’s history that has been almost completely ignored until now.

Home to one of the world’s largest subway systems, New York City made constant efforts to expand its underground labyrinth, efforts that were often met with unexpected obstacles: financial shortfalls, clashing agendas of mayors and borough presidents, battles with local community groups, and much more. After discovering a copy of the 1929 subway expansion map, author Joseph Raskin began his own investigation into the city’s underbelly. Using research from libraries, historical societies, and transit agencies throughout the New York metropolitan area, Raskin provides a fascinating history of the Big Apple’s unfinished business that until now has been only tantalizing stories retold by public-transit experts.

The Routes Not Taken sheds light on the tunnels and stations that were completed for lines that were never fulfilled: the efforts to expand the Hudson tubes into a fullfledged subway; the Flushing line, and why it never made it past Flushing; a platform underneath Brooklyn’s Nevins Street station that has remained unused for more than a century; and the 2nd Avenue line—long the symbol of dashed dreams—deferred countless times since the original plans were presented in 1929. Raskin also reveals the figures and personalities involved, including why Fiorello LaGuardia could not grasp the importance of subway lines and why Robert Moses found them to be old and boring. By focusing on the unbuilt lines, Raskin illustrates how the existing subway system is actually a Herculean feat of countless political compromises.

Filled with illustrations of the extravagant expansion plans, The Routes Not Taken provides an enduring contribution to the transportation history of New York City.

Joseph B. Raskin: Joseph B. Raskin is an independent scholar. He is widely regarded as an authority on unbuilt subway systems, on which he has been interviewed by the New York Times. He recently retired as Assistant Director of Government and Community Relations for MTA New York City Transit.