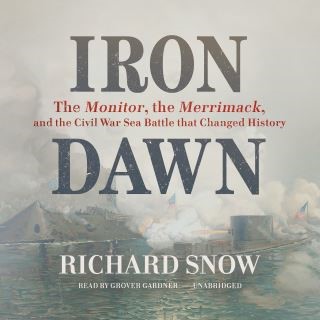 The Monitor, the Merrimack, and the Civil War Sea Battle That Changed History

From acclaimed popular historian Richard Snow comes the thrilling story of the naval battle that changed the Civil War and the future of all sea power.No single sea battle has had more far-reaching consequences than the one fought in the harbor at Hampton Roads, Virginia, in March 1862. The Confederacy, with no fleet of its own, built an iron fort containing ten heavy guns on the hull of a captured Union frigate named the Merrimack. The North got word of the project when it was already well along, and, in desperation, commissioned an eccentric inventor named John Ericsson to build the Monitor, an entirely revolutionary iron warship-at the time, the single most complicated machine ever made. Abraham Lincoln himself was closely involved with the ship's design. Rushed through to completion in just one hundred days, it mounted only two guns, but they were housed in a shot-proof revolving turret.The ship hurried south from Brooklyn (and nearly sank twice on the voyage), only to arrive to find the Merrimack had destroyed half the Union fleet and would be back to finish the job the next day. When she returned, the Monitor was there. She fought the Merrimack to a standstill and saved the Union cause. As soon as word of the battle spread, Great Britain-the foremost sea power of the day-ceased work on all wooden ships. A thousand-year-old tradition ended, and the path to the naval future opened.Iron Dawn is the irresistible story of these incredible, intimidating war machines. Historian Richard Snow brings to vivid life the tensions of the time, explaining how wooden and ironclad ships worked, maneuvered, battled, and sank. This full account of the Merrimack and Monitor has never been told in such immediate, compelling detail.

Richard Snow was born in New York City and graduated with a BA from Columbia College in 1970. He worked at American Heritage for nearly four decades and was its editor-in-chief for seventeen years. He is the author of several books, among them two novels and a volume of poetry. Snow has served as a consultant for historical motion pictures-among them Glory-and has written for documentaries, including the Burns brothers' Civil War and Ric Burns' award-winning PBS film Coney Island, whose screenplay he wrote.

Grover Gardner is an award-winning narrator with over eight hundred titles to his credit. Named one of the "Best Voices of the Century" and a Golden Voice by AudioFile magazine, he has won three prestigious Audie Awards, was chosen Narrator of the Year for 2005 by Publishers Weekly, and has earned more than thirty Earphones Awards.