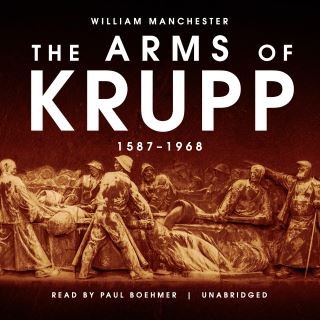 The Arms of Krupp

In this narrative of extraordinary richness, depth, and authority, America's preeminent biographer/historian explored the German national character as no other writer has done. The Arms of Krupp brings to life Europe's wealthiest, most powerful family, a four-hundred-year German dynasty that developed the world's most technologically advanced weapons, from cannons to submarines to anti-aircraft guns; provided arms to generations of German leaders, including the kaiser and Hitler; operated private concentration camps during the Nazi era; survived conviction at Nuremberg; and wielded enormous influence on the course of world events. William Manchester's galvanizing account of the rise and fall of the Krupp dynasty is history as it should be written-alive with all its terrifying power.

William Manchester (1922-2004) was an award-winning American author, biographer, historian, and a professor emeritus of history at Wesleyan University. Among his many New York Times bestselling books are A World Lit Only by Fire; The Glory and the Dream; American Caesar; Goodbye, Darkness; and The Last Lion, a multivolume biography of Winston Churchill. He was also a recipient of the National Humanities Medal and the Abraham Lincoln Literary Award.

J. Paul Boehmer is an American actor best known for his numerous appearances in the Star Trek universe. Hkis audiobook narrations have garnered nine AudioFile Earphones Awards and two prestigious Audie Awards for Best Narration, besides being a finalist for the Audie Award in 2012 and 2015. Between narrations, he is active in regional theaters across the country. His television appearances include guest spots on Nip/Tuck and Numb3rs.