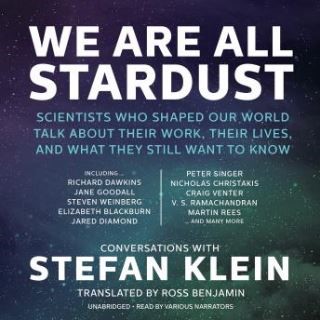 We Are All Stardust

Scientists Who Shaped Our World Talk about Their Work, Their Lives, and What They Still Want to Know

A sterling roster of natural and social scientists in conversation with top-flight journalist Stefan Klein-shedding new light on their work, their lives, and what they still hope to discoverWhen acclaimed science writer Stefan Klein asks Nobel Prize-winning chemist Roald Hoffmann what sets scientists apart, Hoffmann says, "First and foremost, curiosity." In this collection of intimate conversations with nineteen of the world's best-known scientists (including three Nobel Laureates), Klein lets us listen in as today's leading minds reveal what they still hope to discover-and how their paradigm-changing work entwines with their lives outside the lab.From the sports car that physicist Steven Weinberg says helped him on his quest for "the theory of everything" to the jazz musicians who gave psychologist Alison Gopnik new insight into raising children, these scientists explain how they find inspiration everywhere. Hear from renowned scientists including: evolutionary biologist Richard Dawkins on selfishness,anthropologist Sarah Hrdy on motherhood,primatologist Jane Goodall on animal behavior,neuroscientist V. S. Ramachandran on consciousness,geographer Jared Diamond on chance in history, andmany other luminaries.

Stefan Klein, PhD, recipient of the prestigious Georg von Holtzbrinck Prize for Science Journalism, is one of Europe's premier science writers, as well as a trained physicist himself. His many books include the #1 international bestseller The Science of Happiness and have been translated into twenty-five languages.

Ross Benjamin is a translator of German literature and a writer. He has received the prestigious Helen and Kurt Wolff Translator's Prize as well as a National Endowment for the Arts Translation Fellowship.

Gildart Jackson's acting credits span the stage and screen. He is most often recognized for his roles as Gideon on Charmed and Simon Prentiss on General Hospital. He has also starred in numerous television shows, including CSI and Vegas, and he played the lead in the highly acclaimed independent feature film You, directed by his wife, Melora Hardin.

Simon Vance is an award-winning actor and an AudioFile Golden Voice with over forty Earphones Awards. He has won thirteen prestigious Audie Awards and was Booklist's very first Voice of Choice in 2008. He has narrated more than eight hundred audiobooks over almost thirty years, beginning when he was a radio newsreader for the BBC in London.

Kate Reading is an Audie Award-winning narrator and has received numerous Earphones Awards from AudioFile magazine. She is also a theater actor in the Washington, DC, area and has been a member of the Woolly Mammoth Theatre Company since 1987. Her work onstage has been recognized by the Helen Hayes Awards Society, among others. She and her husband live in Hyattsville, Maryland, with their two children.