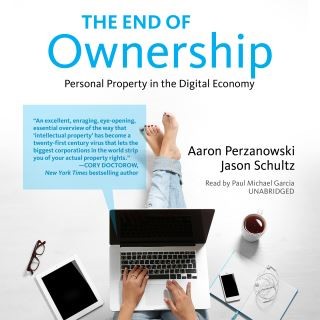 The End of Ownership

Personal Property in the Digital Economy

If you buy a book at the bookstore, you own it. You can take it home, scribble in the margins, put in on the shelf, lend it to a friend, or sell it at a garage sale. But is the same thing true for the e-books or other digital goods you buy? Retailers and copyright holders argue that you don’t own those purchases, you merely license them. That means your e-book vendor can delete the book from your device without warning or explanation—as Amazon deleted Orwell’s 1984 from the Kindles of surprised readers several years ago. These readers thought they owned their copies of 1984—until, it turned out, they didn’t. In The End of Ownership, Aaron Perzanowski and Jason Schultz explore how notions of ownership have shifted in the digital marketplace, and make an argument for the benefits of personal property.

Of course, e-books, cloud storage, streaming, and other digital goods offer users convenience and flexibility. But, as Perzanowski and Schultz warn, consumers should be aware of the trade-offs involving user constraints, permanence, and privacy. The rights of private property are clear, but few people manage to read their end user agreements. Perzanowski and Schultz argue that introducing aspects of private property and ownership into the digital marketplace would offer both legal and economic benefits. But more importantly, it would affirm our sense of self-direction and autonomy. If we own our purchases, we are free to make whatever lawful use of them we please. Technology need not constrain our freedom; it can also empower us.

Jason Schultz is professor of clinical law at New York University School of Law and director of NYU's Technology Law and Policy Clinic.

Paul Michael Garcia, an AudioFile Earphones Award winner and former company member of the Oregon Shakespeare Festival, received his classical training in theater from Southern Oregon University, where he worked as an actor, director, and designer.