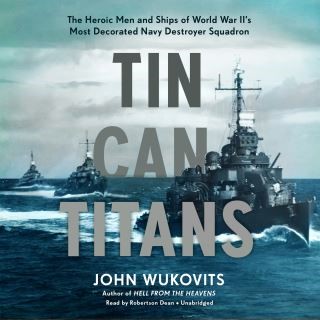 When Admiral William Halsey selected Destroyer Squadron 21 to lead his victorious ships into Tokyo Bay to accept the Japanese surrender, it was the most battle-hardened US naval squadron of the war.But it was not the squadron of ships that had accumulated such an inspiring resume; it was the people serving aboard them. Sailors, not metallic superstructures and hulls, had won the battles and become the stuff of legend. Men like Commander Donald MacDonald, skipper of the USS O'Bannon, who became the most decorated naval officer of the Pacific war; Lieutenant Hugh Barr Miller, who survived his ship's sinking and waged a one-man battle against the enemy while stranded on a Japanese-occupied island; and Doctor Dow "Doc" Ransom, the beloved physician of the USS La Vallette, who combined a mixture of humor and medical expertise to treat his patients at sea, epitomize the sacrifices made by all the men and women of World War II.Through diaries, personal interviews with survivors, and letters written to and by the crews during the war, preeminent historian of the Pacific theater John Wukovits brings to life the human story of the squadron and its men, who bested the Japanese in the Pacific and helped take the war to Tokyo.

John Wukovits, a military expert specializing in the Pacific theater of World War II, is the author of many books, including Eisenhower: A Biography.

Robertson Dean has played leading roles on and off Broadway and at dozens of regional theaters throughout the country. He has a BA from Tufts University and an MFA from Yale. His audiobook narration has garnered numerous AudioFile Earphones Awards. He now lives in Los Angeles, where he works in film and television in addition to narrating.