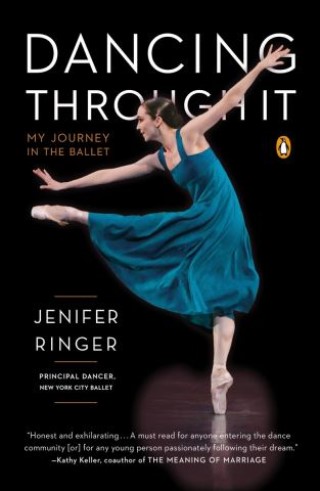 My Journey in the Ballet

“A glimpse into the fragile psyche of a dancer.” —The Washington Post

Jenifer Ringer, a principal dancer with the New York City Ballet, was thrust into the headlines after her weight was commented on by a New York Times critic, and her response ignited a public dialogue about dance and weight.

Ballet aficionados and aspiring performers of all ages will want to join Ringer behind the scenes as she shares her journey from student to star and candidly discusses both her struggle with an eating disorder and the media storm that erupted after the Times review. An unusually upbeat account of life on the stage, Dancing Through It is also a coming-of-age story and an inspiring memoir of faith and of triumph over the body issues that torment all too many women and men.

Jenifer Ringer: Jenifer Ringer was a principal dancer with the New York City Ballet, retiring in 2014. Before joining NYCB as an apprentice in 1989, she studied at the School of American Ballet. Ringer has a BA in English from Fordham University and is a recipient of the Dance Magazine Award and the Jerome Robbins Award. She is married to former NYCB principal dancer James Fayette. They live in Los Angeles, California, with their two children.