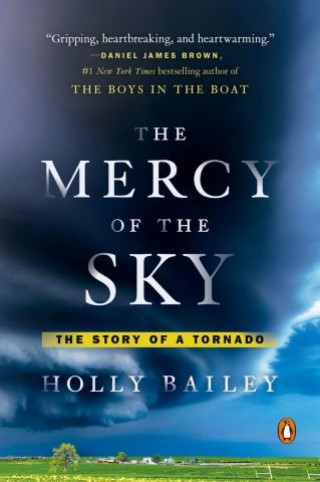 The Mercy of the Sky

The Story of a Tornado

“A gripping, heartbreaking and heartwarming account of the monster tornado that ravaged Moore, Oklahoma in 2013. It will leave you emotionally drained but glad you journeyed into the heart of this extraordinary storm with Bailey as your guide.” --Daniel James Brown, #1 NY Times bestselling author of The Boys in the Boat

An acclaimed reporter returns to her hometown after the worst twister on record and emerges with a suspenseful story of human courage in the face of natural disaster.

On May 20, 2013, the worst tornado on record landed a direct hit on the town of Moore, on the outskirts of Oklahoma City, levelling neighborhoods, sending farm animals flying, and destroying a school while the children cowered inside. Holly Bailey went back both as a journalist and a hometown girl, speaking to the teachers who put their lives at risk as they struggled to comfort their students; to the mayor and first responders who waded through the debris while the storm still raged; to the scientists and meteorologists who have dedicated their lives to understanding tornadoes but still can’t determine when one will land with any degree of certainty and are haunted by every death they might have prevented; to the storm chasers who pursue level 5 twisters with a combination of gadgetry, courage and adrenaline; and to the shell shocked residents of Moore, who rose to the occasion that day with countless acts of selfless courage. An intense and inspiring account of what happened on that fateful day, The Mercy of the Sky Bailey does for the Oklahoma flatlands what Sebastian Junger did for Gloucester, Massachusetts, in The Perfect Storm, telling the dramatic story of a town that must survive the elements—or die.

“The book is excellent – well researched, well told, with a strong narrative that reads like a disaster novel… It’s difficult to imagine that anyone other than an Okie could tell the story so confidently and so well.” – The Oklahoman

“This gripping book tells the story of one resilient Oklahoma town and the immense killer tornado that ripped through it. Holly Bailey brings together riveting science, human drama, courage, tragedy, and redemption to create a quintessential American story. Powerful and moving.” – Douglas Presenton, #1 New York Times bestselling co-author of The Monster of Florence

“Bailey is a brilliant storyteller. She brings you to the center of the storm – and it’s terrifying. She makes you feel a community’s loss – and it’s devastating. And she brings you inside people’s lives as they heal – and it’s inspiring.” – David Greene, host of NPR’s Morning Edition