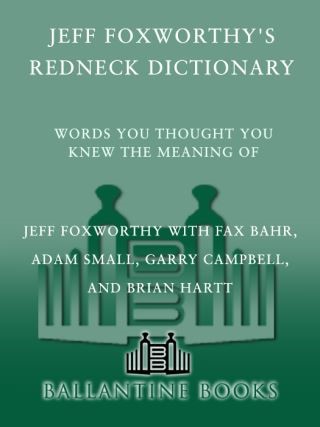 Words You Thought You Knew the Meaning Of

Hey, you! The one holding the book. Have you ever seen a volume like this? Well, whether you realize it or not, it’s the one you’ve been waiting for. Jeff Foxworthy’s Redneck Dictionary will teach you how to speak this unique Southern dialect fluently. Whether you’re blue-collar or hoity-toity, swimming in cash or betting your bottom dollar, a little bit country or a lot of city slicker, this practical reference to redneck words and turns of phrases will give you hours of laughs.
So expand your horizons and learn another language with this fun, instructive, and hilariously illustrated book as your guide. After all, speaking redneck is a heck of a lot easier than speaking French!

Jeff Foxworthy: Jeff Foxworthy is the largest-selling comedy-recording artist in history, a multiple Grammy Award nominee, and the bestselling author of eleven books. He stars in and executive produces the television series Blue Collar TV, which he created for the WB network. Jeff also has an HBO special and two Showtime specials to his credit. His syndicated weekly radio show, The Foxworthy Countdown, is carried in more than 220 markets across the United States. He lives with his wife and two daughters in Atlanta.