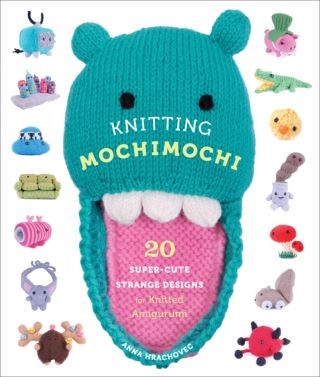 Toys, people! Who doesn't love toys? They make you smile, give you something to squeeze and hug, and can even sit on the couch and watch TV with you. But could the toy be a couch, or an old-fashioned television? Is that too weird? Not if the toy is mochimochi, the super-cute and strange knitted toys author Anna Hrachovec created after fallingi n love with the bizarre character designs that are popular in Japan.

A mochimochi can be anything, from fearsome baby gators to pigs with beehive hairdos, from the toe-nibbling monster slippers to an assortment of itty-bitty hamsters, micro mountains, and human beans complete with comb-overs!

And what knitter doesn't need a diversion from the usual socks, hats, and scarves? Many of these toys take less than an hour to make. Don't worry, even a beginner can learn to knit mochimochi. If your toy comes out a little lumpy, it'll only add to its personality!

Whether it's a bite-free bed bug, a smiling smokestack, or a grouchy couch--these 20 toys are quirkier than teddy bears but every bit as adorable.

Anna Hrachovec launched her knitted toy patterns in 2007. Her creations have been featured on "The Martha Stewart Show" and exhibited in galleries worldwide.