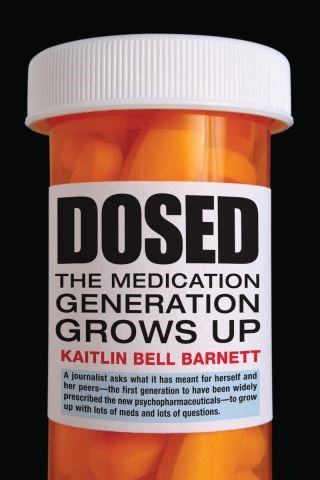 The Medication Generation Grows Up

Over the last two decades, we have seen a dramatic spike in the number of young people taking psychiatric medication--but, despite a heated debate on the issue, we haven't heard directly from the "medicated kids" themselves. In Dosed, Kaitlin Bell Barnett, who was diagnosed with depression as a teenager, weaves together stories from members of this "medication generation, exploring their experiences at home, in school, and with the psychiatric profession. For many, taking meds has proved more complicated than merely popping a pill, as they try to parse their changing emotions, symptoms, side effects, and diagnoses without conclusive scientific research on how the drugs affect developing brains and bodies. While negotiating schoolwork, relationships, and the workplace, they also struggle to find the right drug, deal with breakdowns, decide whether they still need treatment at all--and, ultimately, make sense of their long-term relationship to psychotropic drugs.

The results of what one psychopharmacologist describes as a "giant, uncontrolled experiment" are just starting to trickle in. Barnett shows that a lack of ready answers and guidance has often proven extremely difficult for these young people as they transition from childhood to adolescence and now to adulthood. With its in-depth accounts of individual experiences combined with sociological and scientific context, Dosed provides a much-needed road map for patients, friends, parents, and those in the helping professions trying to navigate the complicated terrain of growing up on meds.

Kaitlin Bell Barnett: Kaitlin Bell Barnett is a freelance writer whose articles have appeared in numerous national and regional newspapers and magazines, including the Boston Globe, New York Observer, Atlanta-Journal Constitution, and Prevention. She lives in Brooklyn with her husband. This is her first book.