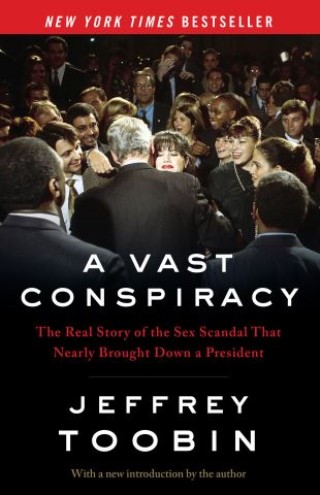 In A Vast Conspiracy, the best-selling author of The Run of His Life casts an insightful, unbiased eye over the most extraordinary public saga of our time -- the Clinton sex scandals.  A superlative journalist known for the skillfulness of his investigating and the power of his writing, Jeffrey Toobin tells the unlikely story of the events that began over doughnuts in a Little Rock hotel and ended on the floor of the United States Senate, with only the second vote on Presidential removal in American history.  This is an entirely fresh look at the scandal that very nearly brought down a president.

Packed with news-making disclosures and secret documents published here for the first time, Toobin unravels the three strands of a national scandal - those leading from  Paula Jones, Kenneth Starr, and Monica Lewinsky - that created a legal, personal, and political disaster for Bill Clinton.  A Vast Conspiracy is written with the narrative drive of a sensational (if improbable) legal thriller, and Toobin brilliantly explores the high principle and low comedy that were the hallmarks of the story.  From Tripp to Goldberg, Isikoff to Hyde, the complex and tangled motivations behind the scandal are laid bare.

Mr. Toobin is also the legal analyst for ABC News and the author of the books, "A Vast Conspiracy: The Real Story of the Sex Scandal that Nearly Brought Down a President" (Random House, 2000), and "The Run of His Life: The People v. O.J. Simpson" (Random House, 1996).

Since joining the magazine, Mr. Toobin has covered legal affairs and written articles on such subjects as Kenneth Starr's investigation of President Clinton, the Paula Jones sexual harassment case, Supreme Court Justice Clarence Thomas,  and the trials of Timothy McVeigh and O.J. Simpson.  His article "An Incendiary Defense," published in the July 25, 1994, issue of the magazine, disclosed for the first time the Simpson defense team's plans to accuse Mark Fuhrman of planting evidence and to play "the race card."

Prior to joining The New Yorker, Mr. Toobin served as an Assistant United States Attorney in Brooklyn, New York.  He also served as an associate counsel in the Office of Independent Counsel Lawrence E. Walsh, an experience that provided the basis for his first book, "Opening Arguments: A Young Lawyer's First Case--United States v. Oliver North."