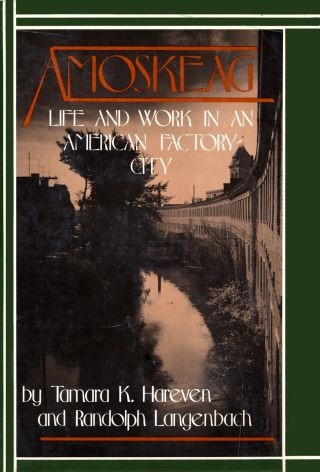 Through the prism of one turn-of-the-century factory-city, Tamara Hareven and Randolph Langenbach have captured the historic experience of millions of Americans. We hear for the first time the eloquent voices—sometimes elegiac, sometimes bitter, yet always powerful—of immigrant being turned into Americans as they worked the machines which were themselves transforming this country.

The book focuses on the Amoskeag Manufacturing Company, once the largest textile factory in the world.  The shells of its awesome mills still extend for two miles along the Merrimack Rover in Manchester, New Hampshire. Never before have we known so vividly what it was like to live a life in the closed world of a single gigantic industrial entity, from the first moment a child set foot in a mill carrying his father’s or mother’s lunchpail to the moment he retired or was laid off sixty years later.

Amoskeag moves through layer after layer of mill life, from the elegant world of Boston-based executives to the cramped quarters of the families of messenger boys, Boston Brahmins and Scottish weaving girls, French-Canadian dirt farmers and Irish immigrants, bosses and workers, create and unforgettable vision of shared experiences and ethnic rivalries, of company loyalty and butter strikes, of back-breaking work and momentary delights in industrializing America.

Over seventy photographs, ranging from classic shots by Lewis Hine to modern portraits of the interviewees, help reconstruct the reality that was Amoskeag.

Tamara K. Hareven: Tamara K. Hareven was a professor of history at Clark University and a research associate at the Center for Population Studies at Harvard. A leading scholar in the development of the field of family history, she was the founder and editor of the Journal of Family History. Her books include Family and Kin in American Urban Communities and Transitions: The Family and the Life Course in Historical Perspectives. She died in 2002.

Randolph Langenbach is a design, architectural historian, and photographer. His articles on and photographs of historic preservation in New England industrial communities have appeared in numerous magazines. He is currently producing an exhibit in London on the architecture of British industrial towns.