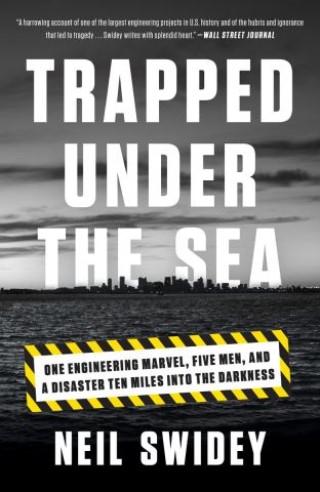 Trapped Under the Sea

One Engineering Marvel, Five Men, and a Disaster Ten Miles Into the Darkness

The harrowing story of five men who were sent into a dark, airless, miles-long tunnel, hundreds of feet below the ocean, to do a nearly impossible job—with deadly results

A quarter-century ago, Boston had the dirtiest harbor in America. The city had been dumping sewage into it for generations, coating the seafloor with a layer of “black mayonnaise.” Fisheries collapsed, wildlife fled, and locals referred to floating tampon applicators as “beach whistles.”

In the 1990s, work began on a state-of-the-art treatment plant and a 10-mile-long tunnel—its endpoint stretching farther from civilization than the earth’s deepest ocean trench—to carry waste out of the harbor. With this impressive feat of engineering, Boston was poised to show the country how to rebound from environmental ruin. But when bad decisions and clashing corporations endangered the project, a team of commercial divers was sent on a perilous mission to rescue the stymied cleanup effort. Five divers went in; not all of them came out alive.

Drawing on hundreds of interviews and thousands of documents collected over five years of reporting, award-winning writer Neil Swidey takes us deep into the lives of the divers, engineers, politicians, lawyers, and investigators involved in the tragedy and its aftermath, creating a taut, action-packed narrative. The climax comes just after the hard-partying DJ Gillis and his friend Billy Juse trade assignments as they head into the tunnel, sentencing one of them to death.

An intimate portrait of the wreckage left in the wake of lives lost, the book—which Dennis Lehane calls "extraordinary" and compares with The Perfect Storm—is also a morality tale. What is the true cost of these large-scale construction projects, as designers and builders, emboldened by new technology and pressured to address a growing population’s rapacious needs, push the limits of the possible? This is a story about human risk—how it is calculated, discounted, and transferred—and the institutional failures that can lead to catastrophe.

Suspenseful yet humane, Trapped Under the Sea reminds us that behind every bridge, tower, and tunnel—behind the infrastructure that makes modern life possible—lies unsung bravery and extraordinary sacrifice.

Neil Swidey: Neil Swidey is the author of The Assist, a Boston Globe bestseller that was named one of the best books of the year by the Washington Post, and coauthor of the New York Times bestselling Last Lion: The Fall and Rise of Ted Kennedy. A staff writer for The Boston Globe Magazine, Swidey has been a finalist for the National Magazine Award and has twice won the Sigma Delta Chi award from the Society of Professional Journalists. He teaches at Tufts University and lives outside Boston with his wife and three daughters.