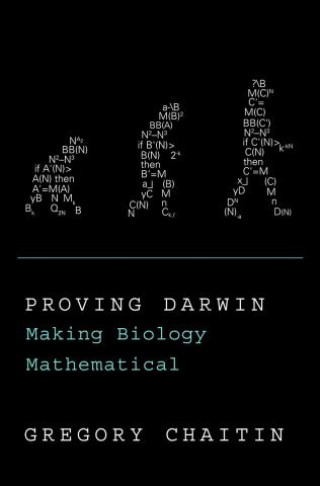 Groundbreaking mathematician Gregory Chaitin gives us the first book to posit that we can prove how Darwin’s theory of evolution works on a mathematical level.

For years it has been received wisdom among most scientists that, just as Darwin claimed, all of the Earth’s life-forms evolved by blind chance. But does Darwin’s theory function on a purely mathematical level? Has there been enough time for evolution to produce the remarkable biological diversity we see around us? It’s a question no one has yet answered—in fact, no one has even attempted to answer it until now.

In this illuminating and provocative book, Gregory Chaitin argues that we can’t be sure evolution makes sense without a mathematical theory. He elucidates the mathematical scheme he’s developed that can explain life itself, and examines the works of mathematical pioneers John von Neumann and Alan Turing through the lens of biology. Chaitin presents an accessible introduction to metabiology, a new way of thinking about biological science that highlights the mathematical structures underpinning the biological world. Fascinating and thought-provoking, Proving Darwin makes clear how biology may have found its greatest ally in mathematics.

Gregory Chaitin is widely known for his work on metamathematics and for his discovery of the celebrated Omega number, which proved the fundamental unknowability of math. He is the author of many books on mathematics, including Meta Math! The Quest for Omega. This is his first book on biology. Chaitin was for many years at the IBM Watson Research Center in New York. The research described in this book was carried out at the Federal University of Rio de Janeiro in Brazil, where Chaitin is now a professor. An Argentine-American, he is an honorary professor at the University of Buenos Aires and has an honorary doctorate from the National University of Cordoba, the oldest university in Argentina.