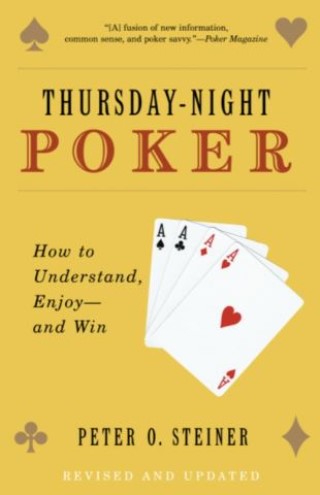 How to Understand, Enjoy--and Win

Intended for the serious biweekly or monthly player, this gaming guide devotes chapters to calculating probabilities, estimating odds, bluffing and being bluffed, reading your opponents' down cards, and more. Virtually everyone will learn from this clearly written, fully illustrated instructional book.

Peter O. Steiner: Peter O. Steiner (1922–2010) served for twenty-three years at the University of Michigan as professor of economics and professor of law. For eight years he was also the dean of the College of Literature, Science, and the Arts. After receiving a PhD from Harvard in 1950, he taught economics and statistics at the University of California at Berkeley and the University of Wisconsin at Madison, before moving to Ann Arbor. He coauthored the textbook Economics, which sold nearly two million copies. Steiner retired from teaching in 1991, but his serious poker playing began during World War II aboard the aircraft carrier USS Independence and was a profitable hobby.