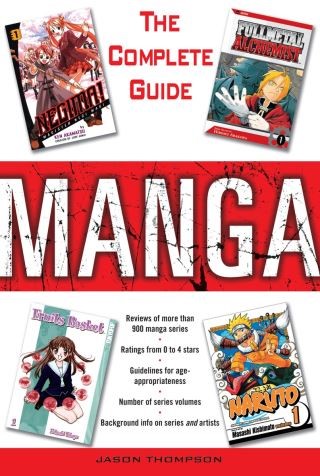 THE ONE-STOP RESOURCE FOR CHOOSING BETWEEN THE BEST AND THE REST!

Whether you’re new to the world of manga-style graphic novels or a longtime reader on the lookout for the next hot series, here’s a comprehensive guide to the wide, wonderful world of Japanese comics!

• Incisive, full-length reviews of stories and artwork
• Titles rated from zero to four stars–skip the clunkers, but don’t miss the hidden gems
• Guidelines for age-appropriateness–from strictly mature to kid-friendly
• Profiles of the biggest names in manga, including CLAMP, Osamu Tezuka, Rumiko Takahashi, and many others
• The facts on the many kinds of manga–know your shôjo from your shônen
• An overview of the manga industry and its history
• A detailed bibliography and a glossary of manga terms

Jason Thompson: Jason Thompson has over ten years’ experience as a manga editor, working at SHOHEN JUMP magazine and other publications. His writing has appeared in Animerica and The Comics Journal.
www.delreybooks.com