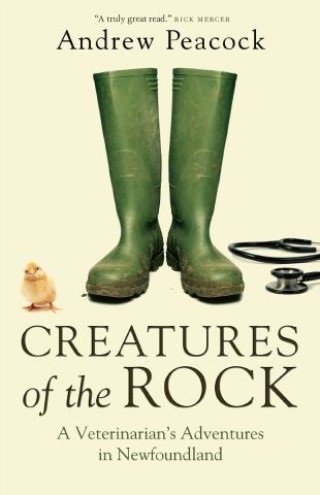 Creatures of the Rock

A Veterinarian's Adventures in Newfoundland

When you’re the only veterinarian in an area that’s 130 miles long and has a coast on either side, you never know what each new day might bring. A cow giving birth, a colicky horse, an aggressive lynx, caribou in need of pastures new, a polar bear in a bingo hall, a six-hundred-pound boar who won’t like what you’ve been asked to do to him… The only constants for Andrew Peacock are his faithful dog and his passion for his work.
When Andrew Peacock made the move from Ontario to Newfoundland, he thought he was kicking off his career as a newly qualified veterinarian with a brief adventure in a novel location. Turns out he was wrong about the duration —he  is still in Newfoundland three decades later.  But it has certainly been an adventure. A whole series of adventures.
In his immense new practice – half the Avalon Peninsula - Andrew was the only vet for miles around, visiting patients (and their owners) on farms, in homes and zoos, and in the wild.
A day’s work could include anything from performing a Caesarian section on a cow in a blizzard, to pursuing a moose on the loose, to freeing a humpback whale from a trap designed for cod. And, on the human side, anything from trying to impress a surprisingly large audience of farmers with your first boar castration, to taking care of the distressed owners of a stricken cat, to discouraging farm hands from helping themselves to hypodermic needles.
All this against the background of a domestic scene in which Andrew's wife Ingrid--also freshly qualified, as a “human doctor”--shares the adventure of making a new life, fitting in to a well-established community, and in due course of starting a family.
Andrew Peacock is a born vet, devoted to the care of animals, and in constant wonder as an observer of their lives.  Luckily for the rest of us, he is a born storyteller, too. Creatures of the Rock is a funny, thrilling, unflinching but ultimately heartwarming collection of tales about the connections between people and animals, and people with each other.

Andrew Peacock was born in Toronto and grew up in Kapuskasing in northern Ontario. After graduating from the Ontario Veterinary College in Guelph he moved to Carbonear, Newfoundland, where he practiced farm animal and pet medicine for twenty-seven years. He and his wife Ingrid now live in Freshwater, just outside of Carbonear.