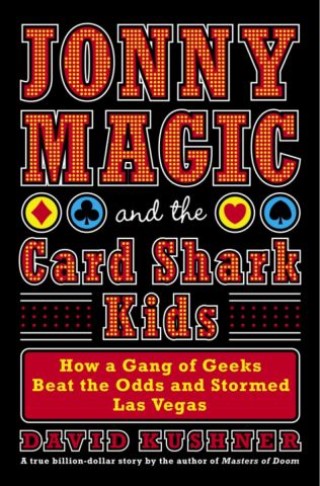 If you think a gang of real-life geeks can’t take on the world and win big . . . think again. And whatever you do, don’t sit down across a gaming table from Jon Finkel, better known as Jonny Magic. Jonny Magic and the Card Shark Kids is his amazing true story: the jaw-dropping, zero-to-hero chronicle of a fat, friendless boy from New Jersey who found his edge in a game of cards–and turned it into a fortune.

The ultimate bully-magnet, Finkel grew up heckled and hazed until destiny came in the form of a trading-card game called Magic: The Gathering. Magic exploded from nerdy obsession to mainstream mania and made the teenage Finkel an ultracool world champion.

Once transformed, this young shark stormed poker rooms from the underground clubs of New York City to the high-stakes tables online, until he landed on the largest card-counting blackjack team in the country. Taking Vegas for millions, Finkel’s squad of brainy gamers became the biggest players in town. Then they took on the town’s biggest game, the World Series of Poker, and walked away with more than $3.5 million.

Thrilling, edgy, and ferociously feel-good, the odyssey of these underdogs-turned-overlords is the stuff of pop-culture legend. And David Kushner, acclaimed author of Masters of Doom, masterfully deals out the outrageous details while bringing to life a cast of characters rife with aces, kings, knaves . . . and more than a few jokers. If you secretly believe every player has his day, you’re right. Here’s the proof.

David Kushner: David Kushner is the author of Masters of Doom: How Two Guys Created an Empire and Transformed Pop Culture. His work has appeared in numerous publications including Rolling Stone, Wired, Spin, Salon, and The New York Times. He lives in New Jersey. Visit his website at www.davidkushner.com.