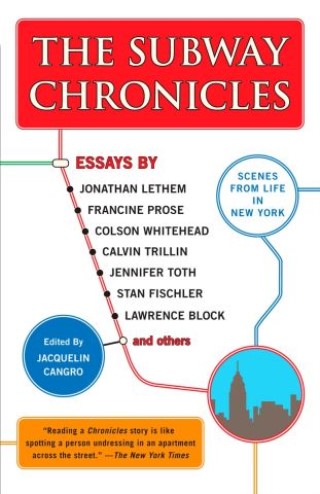 Scenes from Life in New York

Some seven million people board the New York City subway every day, each one with a story to tell. The Subway Chronicles collects twenty-seven of the tales, dramas and comedies that unfold during the daily commute. From the “mole people” living in the subway tunnels, to the transit employees working behind the scenes, to the locals and tourists riding shoulder-to-shoulder in harmony, discord, or indifference, The Subway Chronicles offers a kaleidoscope of perspectives on this most public of spaces.

Equal parts hilarious, poignant, and heartbreaking, The Subway Chronicles is a journey into New York’s underground with some of today’s most loved writers.

Jacquelin Cangro: Jacquelin Cangro, founder of thesubwaychronicles.com, has had her work published in literary journals and is a monthly columnist for Learning Through History magazine. She recently completed her first novel.