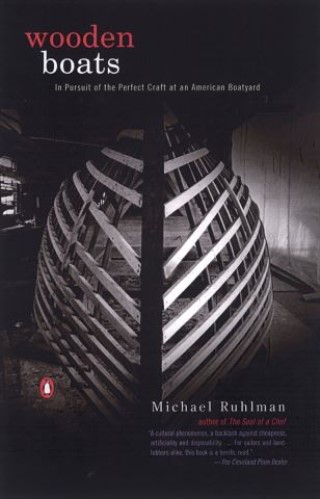 In Pursuit of the Perfect Craft at an American Boatyard

There are fewer than 10,000 wooden boats in America, but the circulation of WoodenBoat magazine exceeds 180,000. What is it about these boats that has captured the popular imagination? With his "lively blend of reportage [and] reflection" (Los Angeles Times), Michael Ruhlman sets off for a renowned boatyard in Martha's Vineyard to follow the construction of two boats-Rebecca, a 60-foot modern pleasure schooner, and Elisa Lee, a 32-foot powerboat. Filled with exquisite details and stories of the sea, this exciting exploration of a nearly forgotten craft and the colorful personalities involved will enthrall wooden boat owners as well as craftspeople of every stripe, nature enthusiasts, and fans of compelling nonfiction.

Michael Ruhlman: Michael Ruhlman is the author of The Making of a Chef, The Soul of a Chef, and Charcuterie. He has also collaborated with Thomas Keller on two cookbooks, The French Laundry Cookbook and Bouchon. Additionally, Ruhlman has written for The New York Times, Gourmet, Saveur, and Food Arts magazine, as well as being featured on the PBS series Cooking Under Fire.