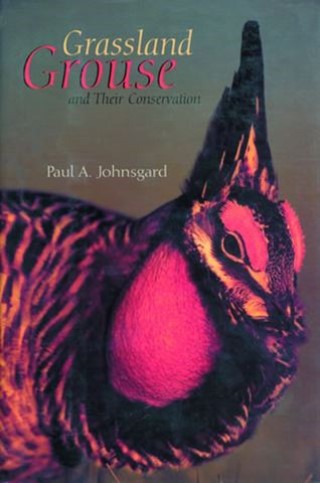 Grassland Grouse and Their Conservation

Paul Johnsgard, one of the world's leading ornithologists, has written this book as a call to action. Conservationists have seen a marked decline in the populations of North American grouse, particularly the grassland-adapted species. Unless action is taken swiftly, at least one species -- Attwater's prairie-chicken -- is certain to follow the heath hen into extinction.

Johnsgard begins with the tragic history of the heath hen, which became extinct in 1932. He devotes a chapter each to the greater and lesser prairie-chickens, greater and Gunnison sage-grouse, and sharp-tailed grouse. Johnsgard argues that habitat loss and excessive hunting are major factors contributing to the decline of each species, particularly the lesser prairie-chicken and the Gunnison sage-grouse, which have been proposed for threatened federal status.

This narrative history is troubling but not without hope. Johnsgard discusses places where populations exist that have yet to be preserved, and outlines the steps necessary to conserve these species. A possible future does exist for grassland grouse, and Johnsgard's book points the way toward securing it.

Paul A. Johnsgard: Paul A. Johnsgard has published more than forty books, including Trogons and Quetzals of the World (2000). He recently retired from the University of Nebraska and lives in Lincoln.