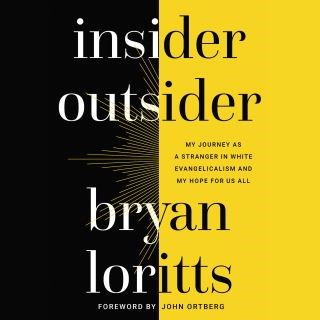 God boldly proclaims throughout the book of Acts, "There is no ethnic home team when it comes to Christianity." But the minority experience in America today--and throughout history--too often tells a different story.

When Pastor Bryan Loritts wrote an op-ed piece in Christianity Today about this "evangelical gentrification" in the American church, he received an overwhelming response of more than one million views and sparked a provocative national conversation. In Insider Outsider, Loritts dives deeper into what it's like to be a person of color in predominantly white evangelical spaces today and where we go from here. Drawing on insightful snapshots through history, eye-opening personal experiences, and biblical exposition, Loritts awakens both our minds and hearts to the painful reality of racial divides as well as the hope of forgiveness.

As Loritts writes, "It is impossible to do theology devoid of cultural lenses and expressions. Like an American unaware of their own accent, most whites are unaware of the ethnic theological accent they carry." Insider Outsider bears witness to the true stories that often go untold--stories that will startle, enlighten, and herald a brighter way forward for all seeking belonging in the family of God.

This seminal book on race and the church will help Christians discover how they can learn the art of listening to stories unlike their own, identify the problems and pitfalls that keep Sunday morning the most segregated hour of the week, and participate in an active movement with God toward a holy vision of what Dietrich Bonhoeffer calls "life together."

Bryan Loritts is the lead pastor of Abundant Life Christian Fellowship in Silicon Valley. A graduate of Cairn University (formerly Philadelphia College of Bible) and Talbot School of Theology, Bryan Loritts was recently voted one of the top thirty emerging Christian leaders. He is the co-founder of Fellowship Memphis—a multi-ethnic church where Bryan served for eleven years, helping it to grow from twenty-six people in a living room to several thousand. Pastor Bryan also served as pastor for preaching and mission at Trinity Grace Church in New York City, and is the author of several books. He is the President of the Kainos Movement, an organization aimed at establishing the multi-ethnic church in America as the new normal, and sits on the Board of Trustees for Biola University and Board of Directors for Pine Cove.  He is the husband of Korie and proud father of three boys: Quentin, Myles, and Jaden. You can follow Pastor Bryan on Twitter @bcloritts.