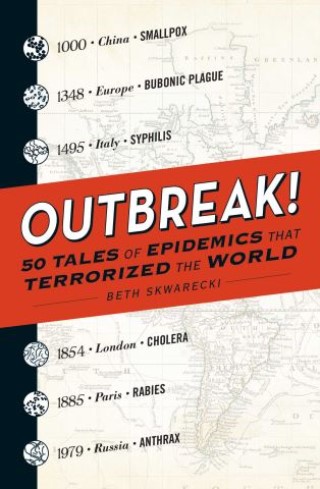 50 Tales of Epidemics that Terrorized the World

From ancient scourges to modern-day pandemics!

Throughout history--even recent history--highly contagious, deadly, and truly horrible epidemics have swept through cities, countrysides, and even entire countries. Outbreak! catalogs fifty of those incidents in gruesome detail, including:

From ancient outbreaks of smallpox and plague to modern epidemics such as SARS and Ebola, the stories capture the mystery and devastation brought on by these diseases. It's a sickeningly fun read that confirms the true definition of going viral.

Beth Skwarecki: Beth Skwarecki is the health editor at LifeHacker.com. She also runs their health vertical, Vitals. She has previously worked as a freelance health and science writer and her work has been featured on Medscape, Performance Menu, Public Health Perspectives, Bitch magazine, the Pittsburgh Post-Gazette, Science, and Scientific American. She is the author of Outbreak! 50 Tales of Epidemics that Terrorized the World and Genetics 101.