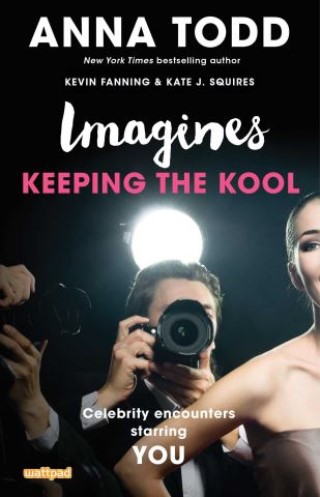 Fanfiction at its best, from your favorite Wattpad authors! In this collection drawn from the Imagines anthology headlined by Anna Todd (After, Nothing More) comes three stories putting “YOU” alongside your favorite family of reality TV—the Kardashians! Join Kim, Kanye, and Kylie on adventures you won’t soon forget.

Imagine selfies have been outlawed, making Kim Kardashian a freedom fighter who needs your help in bringing justice and good lighting to the people…

Imagine Presidnt Kanye West (!!!) has a problem and needs your help...

Imagine Kylie Jenner locks herself in a Target bathroom with you...

A unique and daring series of imagines told in the second-person. “You” get to step into these unpredictable adventures and dive into the fantasy worlds of your favorite celebrities!

Note: Although this book mentions many real celebrities, they have not participated in, authorized, or endorsed its creation.

Anna Todd: Anna Todd is the New York Times bestselling author of the After series of books, The Spring Girls, and the recent The Brightest Stars. After has been released in over thirty-five languages and is a #1 international bestseller. She has since written eight additional novels and serves as a producer and screenwriter on the upcoming film adaptation of After We Collided, the sequel to After. A native of Ohio, Anna lives with her husband and son in Los Angeles. Find her at AnnaTodd.com, on Twitter at @AnnaTodd, on Instagram at @AnnaTodd, and on Wattpad as Imaginator1D.Kevin Fanning (@kfxinfinity on Wattpad) is the author of the book Kim Kardashian: Trapped in Her Own Game, and its sequel, Kim Kardashian: #BreakTheGame. He loves Neko Atsume, Kaylor, the Fast & Furious movies, and the crystal ball emoji. He lives in Cambridge, Massachusetts, and can be found on Twitter and Tumblr as @kfan and on Instagram as @xokfan.Kate J. Squires (@blondeanddangerous on Wattpad) is a self-proclaimed wordsmith, which is totally a real thing. A proud Australian, her job history has included working for Disney, fire dancing, and teaching financial skills—which was hilarious, as she was flat broke at the time. Her life achievements include meeting Hugh Jackman once, marrying a dolphin trainer, and raising two extraordinary little boys. Kate spends her days penning captivating tales for her readers and teaching hot yoga—though generally not at the same time, as this is quite hard on the wrists. Find her on Twitter and Facebook as @KateJSquires.