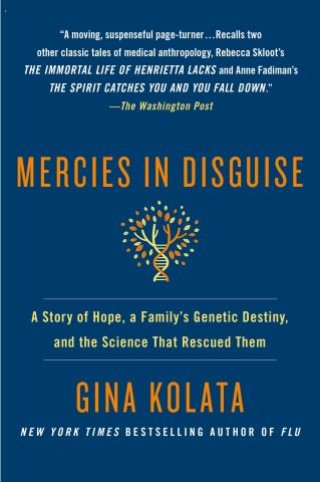 A Story of Hope, a Family's Genetic Destiny, and the Science That Rescued Them

"[Kolata] is a gifted storyteller. Her account of the Baxleys... is both engrossing and distressing... Kolata's book raises crucial questions about knowledge that can be both vital and fatal, both pallative and dangerous." —Andrew Solomon, The New York Review of Books

New York Times science reporter Gina Kolata follows a family through genetic illness and one courageous daughter who decides her fate shall no longer be decided by a genetic flaw.

The phone rings. The doctor from California is on the line. “Are you ready Amanda?” The two people Amanda Baxley loves the most had begged her not to be tested—at least, not now. But she had to find out.

If your family carried a mutated gene that foretold a brutal illness and you were offered the chance to find out if you’d inherited it, would you do it? Would you walk toward the problem, bravely accepting whatever answer came your way? Or would you avoid the potential bad news as long as possible?

In Mercies in Disguise, acclaimed New York Times science reporter and bestselling author Gina Kolata tells the story of the Baxleys, an almost archetypal family in a small town in South Carolina. A proud and determined clan, many of them doctors, they are struck one by one with an inscrutable illness. They finally discover the cause of the disease after a remarkable sequence of events that many saw as providential. Meanwhile, science, progressing for a half a century along a parallel track, had handed the Baxleys a resolution—not a cure, but a blood test that would reveal who had the gene for the disease and who did not. And science would offer another dilemma—fertility specialists had created a way to spare the children through an expensive process.

Gina Kolata: GINA KOLATA (M.A.) is a writer and medical reporter for The New York Times. She has previously written several books, including Flu, and edited collections of popular science writing. Ms. Kolata lives with her husband in Princeton, New Jersey.