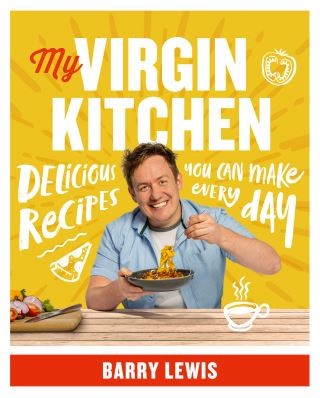 My Virgin Kitchen: Delicious recipes you can make every day

‘He’s a regular guy – he’s not a chef and he’s not formally a cook, and he was a virgin in the kitchen … I love his enthusiasm for food, having a laugh and for family, and I think, at the end of the day, that’s what food is about. Viva Virgin Kitchen!’ – Jamie Oliver‘One of the country’s hottest young chefs’. – The TimesBarry Lewis shot to fame by posting brilliant videos on his YouTube channel My Virgin Kitchen. The channel became an overnight hit, gathering millions of views and now has over 600,000 subscribers. With the backing of Jamie Oliver, Barry became a regular on Jamie’s Food Tube channel.Having taught himself how to cook, Barry is passionate about encouraging others to take the plunge. He focuses on exciting recipes that all the family will love – all made easily, with simple ingredients. His recipes are healthy and delicious and focus on giving everyone the confidence to get stuck in.Whether you’re looking for a quick dinner for everyone such as Coconut Crumbed Chicken or Mac ‘n’ Cheese; fantastic new ideas for pizzas or flapjacks; international influences like Cod Tagine; or hidden veggies in Carrot Cake Cupcakes or Pasta Bake – here is a wonderful collection of recipes to use again and again. If you’re a virgin in the kitchen, you’re in great company!

Barry Lewis: Barry Lewis taught himself to cook step by step, filming the process and posting the videos on his YouTube blog, MyVirginKitchen. The blog became an overnight hit, inspiring thousands of new cooks to pick up the ladle. Before long Barry had been given the seal of approval by his idol, Jamie Oliver, and put his job as a quantity surveyor on hold to follow his dream.Barry lives in Somerset with his partner Becky and two daughters, Phoebe and Chloe.