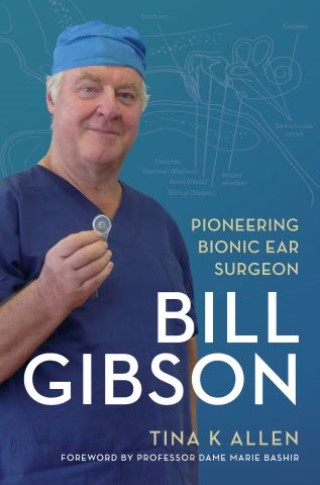 During his distinguished career as an ear, nose and throat surgeon, Professor Bill Gibson gained a reputation as a world-expert in Ménière's disease and cochlear implant surgery. In 1984, he restored the hearing of two young women who were some of the first to receive the bionic ear, developed by Professor Graeme Clark and his team in Melbourne. Three years later Gibson operated on four-year-old Holly McDonell, the first child in the world to receive the bionic ear. This bold step enabled children around the world to receive the gift of hearing and speech. During the next few decades, Gibson performed more than 2,000 cochlear implant operations, making him one of the most prolific surgeons in his field.

Tina K Allen: Tina K Allen BAppSc (Biomed), MA (Journalism), Dip Book Publishing & Editing, worked as a medical scientist for ten years before becoming a freelance medical writer and editor in 1996. She has written feature stories for the GP magazine Australian Doctor, edited the medical journal Pathology and most recently worked as the consultant medical writer for Ramsay Mental Health, a division of Ramsay Health Care. While president of the Australasian Medical Writers Association from 2005 to 2009, she judged many media awards for excellence in medical journalism. Tina lives with her family on a farm in the Southern Highlands of New South Wales. This is her first book.