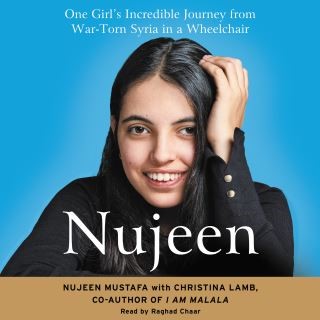 One Girl's Incredible Journey from War-Torn Syria in a Wheelchair

Prize-winning journalist and the co-author of smash New York Times bestseller I Am Malala, Christina Lamb, now tells the inspiring true story of another remarkable young hero: Nujeen Mustafa, a teenager born with cerebral palsy, whose harrowing journey from war-ravaged Syria to Germany in a wheelchair is a breathtaking tale of fortitude, grit, and hope that lends a face to the greatest humanitarian issue of our time, the Syrian refugee crisis.

For millions around the globe, sixteen-year-old Nujeen Mustafa embodies the best of the human spirit. Confined to a wheelchair because of her cerebral palsy and denied formal schooling in Syria because of her illness, Nujeen taught herself English by watching American soap operas. When her small town became the epicenter of the brutal fight between ISIS militants and US-backed Kurdish troops in 2014, she and her family were forced to flee.

Despite her physical limitations, Nujeen embarked on the arduous trek to safety and a new life. The grueling sixteen-month odyssey by foot, boat, and bus took her across Turkey and the Mediterranean to Greece, through Macedonia to Serbia and Hungary, and finally, to Germany. Yet, in spite of the tremendous physical hardship she endured, Nujeen's extraordinary optimism never wavered. Refusing to give in to despair or see herself as a passive victim, she kept her head high. As she told a BBC reporter, "You should fight to get what you want in this world."

Nujeen's positivity and resolve infuses this unforgettable story of one young woman determined to make a better life for herself. Told by acclaimed British foreign correspondent Christina Lamb, Nujeen is a unique and powerful memoir that gives voice to the Syrian refugee crisis, helping us to understand that the world must change—and offering the inspiration to make that change reality.

Born with cerebral palsy, 16-year-old Nujeen Mustafa has spent her life in a wheelchair. She had little formal education in Syria but taught herself English by watching US soap operas. In 2014 her home town of Kobane was at the centre of fierce fighting between Isis militants and US-backed Kurdish forces, forcing her family to flee first across the border into Turkey and then further into Europe, where they currently live, in Germany.

Christina Lamb is one of the world’s leading foreign correspondents. Author of Farewell Kabul and New York Times bestseller I Am Malala, she has reported on Pakistan and Afghanistan since 1987. Educated at Oxford and Harvard, she is the author of five books and has won a number of awards, including Britain’s Foreign Correspondent of the Year five times, as well as the Prix Bayeux-Calvados, Europe’s most prestigious award for war correspondents. She currently works for the Sunday Times and lives in London and Portugal with her husband and son.