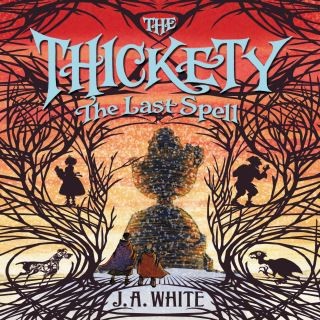 The Thickety #4: The Last Spell

The spellbinding conclusion in the critically acclaimed Thickety series, perfect for fans of Neil Gaiman.

In The Thickety #4: The Last Spell, Kara and her brother Taff must find the hidden pieces of Princess Evangeline’s grimoire to defeat Rygoth and her army of witches in one last good versus evil battle.

They will travel through time with an old enemy, come face-to-face with the creatures that guard the grimoire’s pages, and unravel a king’s dangerous secret, before one final battle against the Spider Queen.

But can Kara save the people she loves and cast a spell that could change magic forever?

J. A. White is the author of The Thickety: A Path Begins. He lives in New Jersey with his wife, three sons, and a hamster named Ophelia that doesn't like him very much. When he's not making up stories, he teaches a bunch of kids how to make up stories (along with math and science and other important stuff). He wishes dragons were real because it would be a much cooler way to get to work.