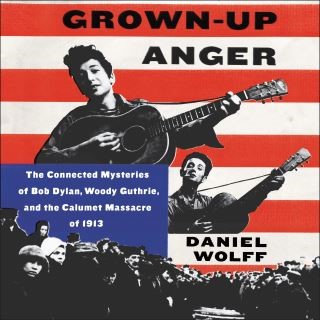 The Connected Mysteries of Bob Dylan, Woody Guthrie, and the Calumet Massacre of 1913

A tour de force of storytelling years in the making: a dual biography of two of the greatest songwriters, Bob Dylan and Woody Guthrie, that is also a murder mystery and a history of labor relations and socialism, big business and greed in twentieth-century America—woven together in one epic saga that holds meaning for all working Americans today.

When thirteen-year-old Daniel Wolff first heard Bob Dylan’s "Like a Rolling Stone," it ignited a life-long interest in understanding the rock poet’s anger. When he later discovered "Song to Woody," Dylan’s tribute to his hero, Woody Guthrie, Wolff believed he’d uncovered one source of Dylan’s rage. Sifting through Guthrie’s recordings, Wolff found "1913 Massacre"—a song which told the story of a union Christmas party during a strike in Calumet, Michigan, in 1913 that ended in horrific tragedy.

Following the trail from Dylan to Guthrie to an event that claimed the lives of seventy-four men, women, and children a century ago, Wolff found himself tracing the history of an anger that has been passed down for decades. From America’s early industrialized days, an epic battle to determine the country’s direction has been waged, pitting bosses against workers and big business against the labor movement. In Guthrie’s eyes, the owners ultimately won; the 1913 Michigan tragedy was just one example of a larger lost history purposely distorted and buried in time.

In this magnificent cultural study, Wolff braids three disparate strands—Calumet, Guthrie, and Dylan—together to create a devastating revisionist history of twentieth-century America. Grown-Up Anger chronicles the struggles between the haves and have-nots, the impact changing labor relations had on industrial America, and the way two musicians used their fury to illuminate economic injustice and inspire change.

Daniel Wolff is the author of The Fight for Home; How Lincoln Learned to Read; 4th of July/Asbury Park; and You Send Me: The Life and Times of Sam Cooke, which won the Ralph J. Gleason Music Book Award. He’s been nominated for a Grammy, published three collections of poetry, and collaborated with, among others, songwriters, documentary filmmakers, photographers, and choreographer Marta Renzi, his wife.

Dennis Boutsikaris received an Obie Award for his performance in Sight Unseen and was Mozart in Amadeus on Broadway. His films include *batteries not included, The Dream Team, and Boys On The Side. His TV work includes And Then There Was One, The Last Don and Chasing The Dragon; he was most recently the D.A. of NY in Sidney Lumet's 100 Centre Street.