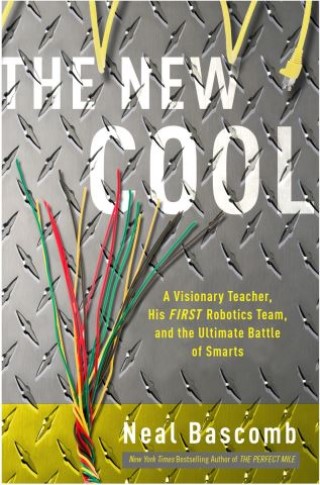 A Visionary Teacher, His FIRST Robotics Team, and the Ultimate Battle of Smarts

That Monday afternoon, in high-school gyms across America, kids were battling for the only glory American culture seems to want to dispense to the young these days: sports glory.  But at Dos Pueblos High School in Goleta, California, in a gear-cluttered classroom, a different type of “cool” was brewing.  A physics teacher with a dream – the first public high-school teacher ever to win a MacArthur Genius Award -- had rounded up a band of high-I.Q. students who wanted to put their technical know-how to work.  If you asked these brainiacs what the stakes were that first week of their project, they’d have told you it was all about winning a robotics competition – building the ultimate robot and prevailing in a machine-to-machine contest in front of 25,000 screaming fans at Atlanta’s Georgia Dome.

But for their mentor, Amir Abo-Shaeer, much more hung in the balance.

The fact was, Amir had in mind a different vision for education, one based not on rote learning -- on absorbing facts and figures -- but on active creation.  In his mind’s eye, he saw an even more robust academy within Dos Pueblos that would make science, technology, engineering, and math (STEM) cool again, and he knew he was poised on the edge of making that dream a reality.  All he needed to get the necessary funding was one flashy win – a triumph that would firmly put his Engineering Academy at Dos Pueblos on the map.  He imagined that one day there would be a nation filled with such academies, and a new popular veneration for STEM – a “new cool” – that would return America to its former innovative glory.

It was a dream shared by Dean Kamen, a modern-day inventing wizard – often-called “the Edison of his time” – who’d concocted the very same FIRST Robotics Competition that had lured the kids at Dos Pueblos.  Kamen had created FIRST (For Inspiration and Recognition of Science and Technology) nearly twenty years prior.  And now, with a participant alumni base approaching a million strong, he felt that awareness was about to hit critical mass.

But before the Dos Pueblos D’Penguineers could do their part in bringing a new cool to America, they’d have to vanquish an intimidating lineup of “super-teams”– high-school technology goliaths that hailed from engineering hot spots such as Silicon Valley, Massachusetts’ Route 128 technology corridor, and Michigan’s auto-design belt.  Some of these teams were so good that winning wasn’t just hoped for every year, it was expected.

In The New Cool, Neal Bascomb manages to make even those who know little about – or are vaguely suspicious of – technology care passionately about a team of kids questing after a different kind of glory.  In these kids’ heartaches and headaches – and yes, high-five triumphs -- we glimpse the path not just to a new way of educating our youth but of honoring the crucial skills a society needs to prosper.  A new cool.

Neal Bascomb has published a number of international and national bestsellers, including Higher, The Perfect Mile, Red Mutiny and Hunting Eichmann.  His books have been optioned for film, featured in several documentaries and translated in 10 languages.  He has also written for the New York Times, Wall Street Journal and Los Angeles Times. He and his wife and their two daughters make their home in Philadelphia, Pennsylvania.

Neal Bascomb has published a number of international and national bestsellers, including Higher, The Perfect Mile, Red Mutiny and Hunting Eichmann.  His books have been optioned for film, featured in several documentaries and translated in 10 languages.  He has also written for the New York Times, Wall Street Journal and Los Angeles Times. He and his wife and their two daughters make their home in Philadelphia, Pennsylvania.