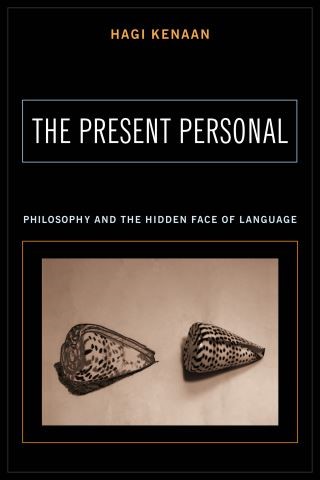 Philosophy and the Hidden Face of Language

Is philosophy deaf to the sound of the personal voice? While philosophy is experienced at admiring, resenting, celebrating, and, at times, renouncing language, philosophers have rarely succeeded in being intimate with it. Hagi Kenaan argues that philosophy's concern with abstract forms of linguistic meaning and the objective, propositional nature of language has obscured the singular human voice. In this strikingly original work Kenaan explores the ethical and philosophical implications of recognizing and responding to the individual presence in language.

In pursuing the philosophical possibility of listening to language as the embodiment of the human voice, Kenaan explores the phenomenological notion of the "personal." He defines the personal as the irresolvable tension that exists between the public character of language, necessary for intelligibility, and the ways in which we, as individuals, remain riveted to our words in a contingently singular manner.

The Present Personal fuses phenomenology and aesthetics and the traditions of Continental and Anglo-American philosophy, drawing on Wittgenstein, J. L. Austin, Kant, Kierkegaard, and Heidegger as well as literary works by Kafka, Kundera, and others. By asking new questions and charting fresh terrain, Kenaan does more than offer innovative investigations into the philosophy of language; The Present Personal, and its concern with the intimate and personal nature of language, uncovers the ethical depth of our experience with language.

Kenaan begins with a discussion of Kierkegaard's existential critique of language and the ways in which the propositional structure of language does not allow the spoken to reflect the singularity of the self. He then compares two attempts to subvert the "hegemony of content": the pragmatic turn of J. L. Austin and the poetic path of Heidegger. Kenaan concludes by turning to Kant and discovering an analogy between the experience of meaning in language and the aesthetic experience of encountering beauty. Kenaan's reconceptualization of philosophy's approach to language frees the contingent singularity of language while, at the same time, permitting it to continue to dwell within the confines of content.