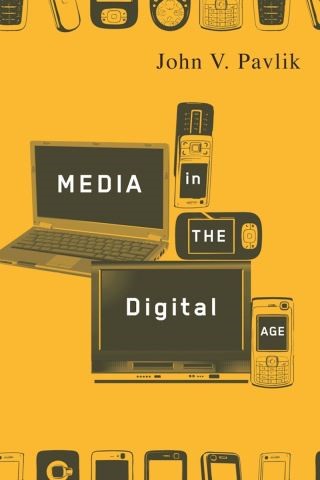 Media in the Digital Age

Digital technologies have fundamentally altered the nature and function of media in our society, reinventing age-old practices of public communication and at times circumventing traditional media and challenging its privileged role as gatekeepers of news and entertainment. Some critics believe these technologies keep the public involved in an informed discourse on matters of public importance, but it isn't clear this is happening on a large scale. Propaganda disguised as news is flourishing, and though interaction with the digital domain teaches children valuable skills, it can also expose them to grave risks.

John V. Pavlik critically examines our current digital innovationsblogs, podcasting, peer-to-peer file sharing, on-demand entertainment, and the digitization of television, radio, and satellitesand their positive and negative implications. He focuses on present developments, but he also peers into the future, foreseeing a media landscape dominated by a highly fragmented, though active audience, intense media competition, and scarce advertising dollars. By embracing new technologies, however, Pavlik shows how professional journalism and media can hold on to their role as a vital information lifeline and continue to operate as the tool of a successful democracy.