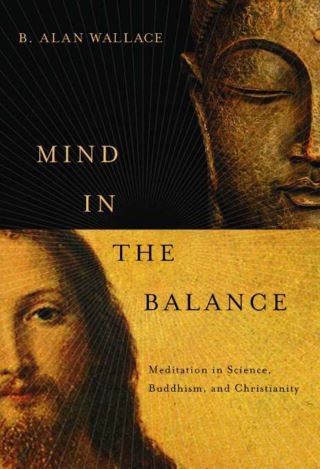 Mind in the Balance

Meditation in Science, Buddhism, and Christianity

By establishing a dialogue in which the meditative practices of Buddhism and Christianity speak to the theories of modern philosophy and science, B. Alan Wallace reveals the theoretical similarities underlying these disparate disciplines and their unified approach to making sense of the objective world.

Wallace begins by exploring the relationship between Christian and Buddhist meditative practices. He outlines a sequence of meditations the reader can undertake, showing that, though Buddhism and Christianity differ in their belief systems, their methods of cognitive inquiry provide similar insight into the nature and origins of consciousness.

From this convergence Wallace then connects the approaches of contemporary cognitive science, quantum mechanics, and the philosophy of the mind. He links Buddhist and Christian views to the provocative philosophical theories of Hilary Putnam, Charles Taylor, and Bas van Fraassen, and he seamlessly incorporates the work of such physicists as Anton Zeilinger, John Wheeler, and Stephen Hawking. Combining a concrete analysis of conceptions of consciousness with a guide to cultivating mindfulness and profound contemplative practice, Wallace takes the scientific and intellectual mapping of the mind in exciting new directions.