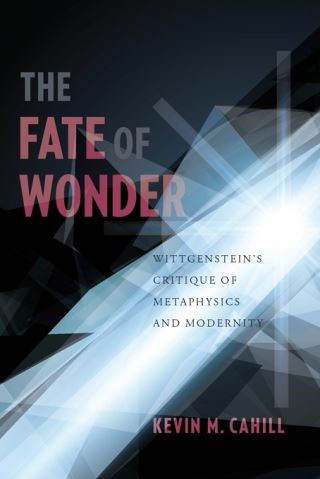 The Fate of Wonder

Wittgenstein's Critique of Metaphysics and Modernity

Kevin M. Cahill reclaims one of Ludwig Wittgenstein's most passionately pursued endeavors: to reawaken a sense of wonder around human life and language and its mysterious place in the world. Following the philosopher's spiritual and cultural criticism and tying it more tightly to the overall evolution of his thought, Cahill frames an original interpretation of Wittgenstein's engagement with Western metaphysics and modernity, better contextualizing the force of his work.

Cahill synthesizes several approaches to Wittgenstein's life and thought. He stresses the nontheoretical aspirations of the philosopher's early and later writings, combining key elements from the so-called resolute readings of the Tractatus with the "therapeutic" readings of Philosophical Investigations. Cahill shows how continuity in Wittgenstein's cultural and spiritual concerns informed if not guided his work between these texts, and in his reading of the Tractatus, Cahill identifies surprising affinities with Martin Heidegger's Being and Time—a text rarely associated with Wittgenstein's early formulations.

In his effort to recapture wonder, Wittgenstein both avoided and undermined traditional philosophy's reliance on theory. As Cahill relates the steps of this bold endeavor, he forms his own innovative, analytical methods, joining historicist and contextualist approaches to text-based, immanent readings. The result is an original, sustained examination of Wittgenstein's thought.