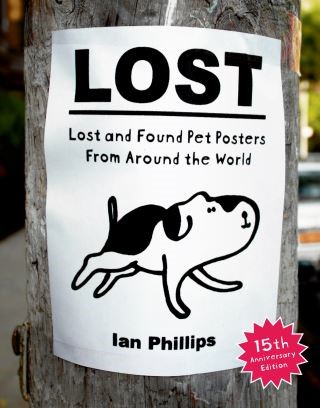 Lost and Found Pet Posters from Around the World

Despite all the visual distractions of the digital age, one low-tech form of mass communication remains as popular as ever: the lost pet poster. Stapled to telephone poles and bulletin boards in cities and suburbs worldwide, these often hastily made signs are quirky combinations of hand-drawn illustration, emotional longing, and surprisingly offbeat humor. For more than a decade, artist and animal lover Ian Phillips collected lost and found pet posters from around the world.

LOST features the most notable selections from Phillips's collection chosen for their cleverness, humor, sorrow, entreaties, rewards, and—in several instances—sheer outlandishness. Featuring a veritable Noah's ark of animals—from everyday pets such as dog, cats, hamsters, and turtles to more unusual companions, including ferrets, parrots, cows, and cockatiels—these remarkable posters are their own form of folk art. Telling tales of friendship, loss, and hope, they are a powerful testament to the love and devotion shared by pet owners everywhere.

Ian Phillips: Ian Phillips is a book and magazine illustrator living in Toronto. He put up ten copies for each lost pet poster he added to his collection.