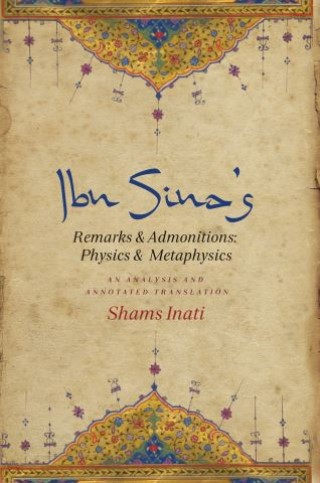 An Analysis and Annotated Translation

Al-Isharat wal-Tanbihat (Remarks and Admonitions) is one of the most mature and comprehensive philosophical works by Ibn Sina (Avicenna, 980–1037). Grounded in an exploration of logic (which Ibn Sina described as the gate to knowledge) and happiness (the ultimate human goal), the text illuminates the divine, the human being, and the nature of things through a wide-ranging discussion of topics. The sections of Physics and Metaphysics deal with the nature of bodies and souls as well as existence, creation, and knowledge. Especially important are Ibn Sina's views of God's knowledge of particulars, which generated much controversy in medieval Islamic and Christian philosophical and theological circles and provoked a strong rejection by eleventh-century philosopher al-Ghazali.

This book provides the first annotated English translation of Physics and Metaphysics and edits the original Arabic text on which the translation is based. It begins with a detailed analysis of the text, followed by a translation of the three classes or groups of ideas in the Physics (On the Substance of Bodies, On the Directions and Their Primary and Secondary Bodies, and On the Terrestrial and Celestial Souls) and the four in the Metaphysics (On Existence and Its Causes, Creation Ex Nihilo and Immediate Creation, On Ends, on Their Principles, and on the Arrangement [of Existence], and On Abstraction. The Metaphysics closes with a significant discussion of the concepts of providence, good, and evil, which Ibn Sina uses to introduce a theodicy.

Researchers, faculty, and students in philosophy, theology, religion, and intellectual history will find in this work a useful and necessary source for understanding Ibn Sina's philosophical thought and, more generally, the medieval Islamic and Christian study of nature, the world beyond, psychology, God, and the concept of evil.