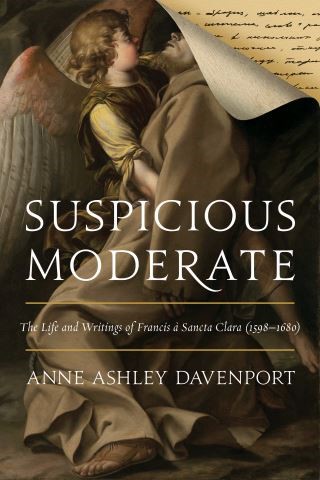 The historiography of English Catholicism has grown enormously in the last generation, led by scholars such as Peter Lake, Michael Questier, Stefania Tutino, and others. In Suspicious Moderate, Anne Ashley Davenport makes a significant contribution to that literature by presenting a long overdue intellectual biography of the influential English Catholic theologian Francis à Sancta Clara (1598–1680). Born into a Protestant family in Coventry at the end of the sixteenth century, Sancta Clara joined the Franciscan order in 1617. He played key roles in reviving the English Franciscan province and in the efforts that were sponsored by Charles I to reunite the Church of England with Rome. In his voluminous Latin writings, he defended moderate Anglican doctrines, championed the separation of church and state, and called for state protection of freedom of conscience.

Suspicious Moderate offers the first detailed analysis of Sancta Clara's works. In addition to his notorious Deus, natura, gratia (1634), Sancta Clara wrote a comprehensive defense of episcopacy (1640), a monumental treatise on ecumenical councils (1649), and a treatise on natural philosophy and miracles (1662). By carefully examining the context of Sancta Clara's ideas, Davenport argues that he aimed at educating English Roman Catholics into a depoliticized and capacious Catholicism suited to personal moral reasoning in a pluralistic world. In the course of her research, Davenport also discovered that "Philip Scot," the author of the earliest English discussions of Hobbes (a treatise published in 1650), was none other than Sancta Clara. Davenport demonstrates how Sancta Clara joined the effort to fight Hobbes's Erastianism by carefully reflecting on Hobbes's pioneering ideas and by attempting to find common ground with him, no matter how slight.