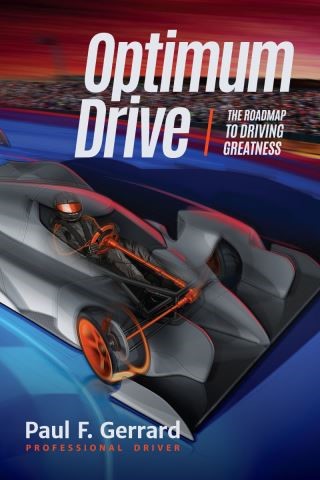 The Road Map to Driving Greatness

Don't Just Be Good ─ You Can Be Great!

Attaining peak performance: Optimum Drive is a motivational book that uses top level race car driving as a metaphor for peak performance. As a professional racing driver and a driving coach for over 20 years, author Paul F. Gerrard gives you his unique perspective on what causes people to stagnate with the idea of being merely good, when each of us has the potential to be great. Gerrard believes that peak performance is within our grasp. He lays out his step-by-step process for attaining peak performance with detailed nuance threaded throughout. If you have ever been curious about maximizing your own ultimate potential, Optimum Drive is for you!

Mental toughness: Greatness is as hard to quantify as it is to achieve…probably not a coincidence. In this book, Optimum Drive, professional driver Gerrard helps you understand the mental toughness that it takes to reach that greatness. He starts off by taking you onto the track as he explores what driving at 200 mph can teach us about who we are. Using his experiences from behind the wheel at death-defying speeds, Gerrard breaks down the psychology of driving, what it takes, and how we can use it to achieve greatness in life.

Flow psychology and staying in the zone: The key to the mental toughness that Gerrard believes it takes to achieve peak performance is the nirvana-like sensation of flow psychology or being in the zone. Flow psychology, or being in the zone, is a mental state in which one who is performing an activity is fully immersed in a feeling of energized focus, full involvement, and joy. It is through flow psychology that Gerrard introduces a blend of holistic mindset combined with a competitive edge, which is essential to successful professional driving. This mix of guts, tenacity and endurance is the foundation of Gerrard’s philosophy for attaining greatness.

Why you should read Optimum Drive

Paul F. Gerrard: Prior to becoming a professional stunt driver, Paul Gerrard earned multiple racing championships and became Chief of Special Projects for Skip Barber ― the largest racing school in the world. Gerrard has a wide range of automotive talents and deep history in motorsports. His ability to write and present in an entertaining and compelling manner has earned appearances on TV shows such as MythBusters, ABC Nightly News, Supercars Exposed, and National Geographic’s Ultimate Factories. Gerrard is also a commentator at X Games for ESPN and the voice for the Global Rallycross Championship race series that features Ken Block and Tanner Foust.The preface for Optimum Drive was provided by Allan Mcnish. Allan is among sportscar racing's elite. With Porsche and Audi he joined an exclusive club of three-time winners of the notoriously demanding 24 Hours of Le Mans, became FIA WEC World Champion with Audi, he has won three American Le Mans Series titles, and is the most successful British driver in America’s revered Sebring 12 Hour, with four wins. A former factory Audi driver in the FIA World Endurance Championship, Allan's commitments include being an Audi Ambassador, media duties for BBC F1 & BBC Radio 5 Live, FIA Formula One Driver Steward roles, and he is proud to be the President of the Scottish Motor Racing Club.The foreword for Optimum Drive was provided by Tanner Foust. Tanner is a versatile and multi-talented driver known for his supreme car control and a proven track record of podium placements, national championships and world records. He is a three-time U.S. rallycross champion (2012, 2011, 2010) who has also won four X Games gold medals (2013, 2010, 2007), and two Formula Drift championships (2008, 2007). Off the track, Tanner demonstrates his impressive car control and driving experience on-camera as host for History Channel's Top Gear and performing stunts for various films, TV shows, and commercials.