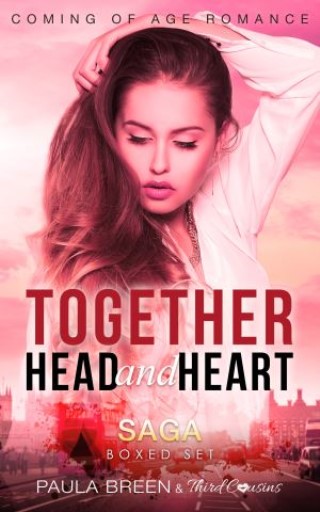 Book 1: "Melisa hasn't seen her father since he moved to England. She hasn't wanted to. He broke her mother’s heart and left them to pick up the pieces of their fractured lives. He’s getting married, though, and he’s insisting that she’s there for his special day. Melisa is sure that the nightmare will begin from the moment she gets on the plane. She doesn't even like flying. Things aren't quite as dark as they seem, though, when the hottest guy she’s ever seen sits down next to her with a book in his hand. They've got ten hours before they land. They're perfect strangers. They're taking off on an unplanned adventure together, but when turbulence strikes will they find themselves suffering through a crash landing?" Book 2: "Melisa had refused to accept Claire because of what she did. She knowingly had an affair with a married man. She had knowingly opened a weakness in Melisa’s family and she tore them apart. How could Melisa forgive her for that? How could she forgive her for doing something which was so clearly wrong? Melisa’s stance gets put to the test, though, when she finds out that her crush from the plane has a girlfriend and that he seems pretty reluctant to change that." Book 3: "Lisa gave Calvin a choice and he made it. It’s just, when she gave him the choice to make, she’d thought he would pick the right one. He didn’t, though. He didn’t make the right choice. He didn’t pick her. He picked Penelope instead. When Lisa decides to cut her trip short, she’s sure that it’s the right thing to do. She’s desperate to get away from Calvin and she knows that she can’t do that until she’s put the trip behind her. When she gets on the plane home, though, she finds herself trapped with the very things that she has been trying to run from."

Third Cousins: Romance is defined as the quality or feeling of mystery, excitement, and remoteness from everyday life. This is epitomizes every book that is published by Third Cousins, an imprint of Speedy Publishing. If you enjoy reading books that hinge on the edge of romantic excitement and avoids the explicit scenes, then every book in our catalog is just for you. Find yourself immersed in danger, excitement and romantic adventures in every turn with brilliant visualizations that allow you to join the characters in the story and moves you from cliff hanger to cliff hanger with an unexpected twist leaving every reader satisfied and thrilled! Grab a copy of any Third Cousins publication and be ensured that every copy is professionally edited and a must have in both your print and eBook libraries. Never leave home without a Third Cousins Book!