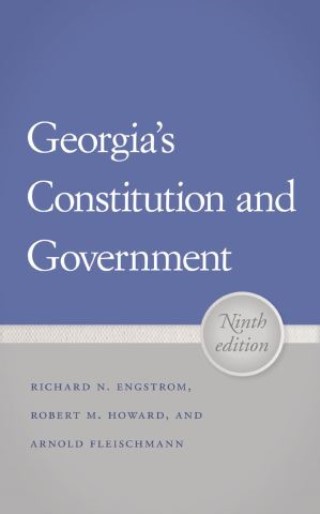 By state law, graduates of public colleges and universities in Georgia must demonstrate proficiency with both the U.S. and Georgia constitutions. This widely used textbook helps students to satisfy that requirement, either in courses or by examination. This brief and affordable study aid begins with a discussion of the ways that state and local governments, in providing services and allocating funds, affect our daily lives. Subsequent chapters are devoted to

the development of our federal system and the importance of constitutions in establishing authority, distributing power, and formalizing procedures
how the various state constitutions differ from each other, even as they all complement the U.S. Constitution
how constitutions in Georgia have been amended or replaced
Georgia’s governmental institutions at the state, county, and city levels
elections in Georgia, including the basic ground rules for holding primaries, general elections, and runoffs

Key terms and concepts are covered throughout the book, as well as important court cases at the national and state level. In addition, helpful lists, diagrams, and tables summarize and compare such information as
the structure of Georgia’s court system

the number of constitutions each of the fifty states has had, the number of times each state’s constitution has been amended, and the length of each state’s current constitution
various procedures used by the states to amend their constitutions
Georgia’s ten constitutions, with highlights of their major changes or features
the number of amendments voted on in Georgia from 1984 to 2012
the executive branch officials elected by the public across states
the constitutional boards and commissions in Georgia, with details on the methods by which members are chosen
the number and types of local governments in Georgia since 1952 including counties, municipalities, school districts, and special districts
the major federal cases in which Georgia has been a party, on issues of discrimination, representation, freedom of speech and the press, the accused or convicted of crimes, and the right to privacy
rights and liberties, and how constitutions guarantee and protect them