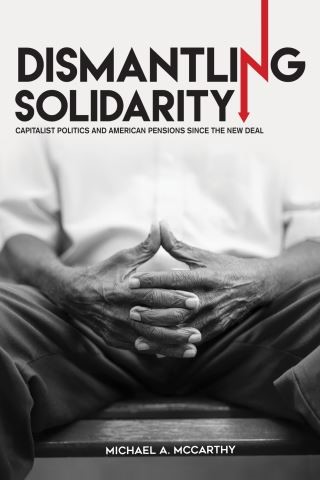 Capitalist Politics and American Pensions since the New Deal

Why has old-age security become less solidaristic and increasingly tied to risky capitalist markets? Drawing on rich archival data that covers more than fifty years of American history, Michael A. McCarthy argues that the critical driver was policymakers' reactions to capitalist crises and their political imperative to promote capitalist growth.Pension development has followed three paths of marketization in America since the New Deal, each distinct but converging: occupational pension plans were adopted as an alternative to real increases in Social Security benefits after World War II, private pension assets were then financialized and invested into the stock market, and, since the 1970s, traditional pension plans have come to be replaced with riskier 401(k) retirement plans. Comparing each episode of change, Dismantling Solidarity mounts a forceful challenge to common understandings of America’s private pension system and offers an alternative political economy of the welfare state. McCarthy weaves together a theoretical framework that helps to explain pension marketization with structural mechanisms that push policymakers to intervene to promote capitalist growth and avoid capitalist crises and contingent historical factors that both drive them to intervene in the particular ways they do and shape how their interventions bear on welfare change. By emphasizing the capitalist context in which policymaking occurs, McCarthy turns our attention to the structural factors that drive policy change. Dismantling Solidarity is both theoretically and historically detailed and superbly argued, urging the reader to reconsider how capitalism itself constrains policymaking. It will be of interest to sociologists, political scientists, historians, and those curious about the relationship between capitalism and democracy.

Michael A. McCarthy is Assistant Professor of Sociology at Marquette University.