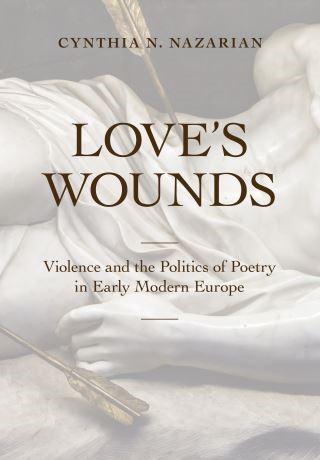 Violence and the Politics of Poetry in Early Modern Europe

Love's Wounds takes an in-depth look at the widespread language of violence and abjection in early modern European love poetry. Beginning in fourteenth-century Italy, this book shows how Petrarch established a pattern of inequality between suffering poet and exalted Beloved rooted in political parrhēsia. Sixteenth- and early seventeenth-century French and English poets reshaped his model into an idiom of extravagant brutality coded to their own historical circumstances. Cynthia N. Nazarian argues that these poets exaggerated the posture of the downtrodden lover, adapting the rhetoric of powerless desire to forge a new "countersovereignty" from within the heart of vulnerability—a potentially revolutionary position through which to challenge cultural, religious, and political authority. Creating a secular equivalent to the martyr, early modern sonneteers crafted a voice that was both critical and unstoppable because it suffered.Love’s Wounds tracks the development of the countersovereign voice from Francesco Petrarca to Maurice Scève, Joachim du Bellay, Théodore-Agrippa d’Aubigné, Edmund Spenser, and William Shakespeare. Through interdisciplinary and transnational analyses, Nazarian reads early modern sonnets as sites of contestation and collaboration and rewrites the relationship between early modern literary forms.

Cynthia N. Nazarian is Assistant Professor in the Department of French and Italian at Northwestern University.