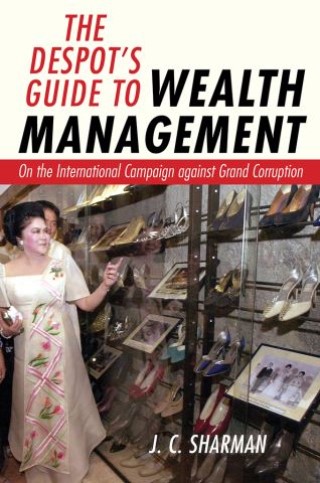 The Despot's Guide to Wealth Management

On the International Campaign against Grand Corruption

An unprecedented new international moral and legal rule forbids one state from hosting money stolen by the leaders of another state. The aim is to counter grand corruption or kleptocracy ("rule by thieves"), when leaders of poorer countries—such as Marcos in the Philippines, Mobutu in the Congo, and more recently those overthrown in revolutions in the Arab world and Ukraine—loot billions of dollars at the expense of their own citizens. This money tends to end up hosted in rich countries. These host states now have a duty to block, trace, freeze, and seize these illicit funds and hand them back to the countries from which they were stolen. In The Despot's Guide to Wealth Management, J. C. Sharman asks how this anti-kleptocracy regime came about, how well it is working, and how it could work better. Although there have been some real achievements, the international campaign against grand corruption has run into major obstacles. The vested interests of banks, lawyers, and even law enforcement often favor turning a blind eye to foreign corruption proceeds. Recovering and returning looted assets is a long, complicated, and expensive process.

Sharman used a private investigator, participated in and observed anti-corruption policy, and conducted more than a hundred interviews with key players. He also draws on various journalistic exposés, whistle-blower accounts, and government investigations to inform his comparison of the anti-kleptocracy records of the United States, Britain, Switzerland, and Australia. Sharman calls for better policing, preventative measures, and use of gatekeepers like bankers, lawyers, and real estate agents. He also recommends giving nongovernmental organizations and for-profit firms more scope to independently investigate corruption and seize stolen assets.

J. C. Sharman is Sir Patrick Sheehy Professor of International Relations at the University of Cambridge. He is the author of The Despot's Guide to Wealth Management: On the International Campaign against Grand Corruption, The Money Laundry: Regulating Criminal Finance in the Global Economy, and Havens in a Storm: The Struggle for Global Tax Regulation, all from Cornell, and coauthor most recently of International Order in Diversity: War, Trade and Rule in the Indian Ocean.