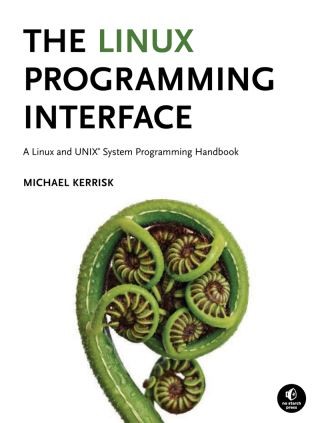 The Linux Programming Interface (TLPI) is the definitive guide to the Linux and UNIX programming interface—the interface employed by nearly every application that runs on a Linux or UNIX system.

In this authoritative work, Linux programming expert Michael Kerrisk provides detailed descriptions of the system calls and library functions that you need in order to master the craft of system programming, and accompanies his explanations with clear, complete example programs.

While The Linux Programming Interface covers a wealth of Linux-specific features, including epoll, inotify, and the /proc file system, its emphasis on UNIX standards (POSIX.1-2001/SUSv3 and POSIX.1-2008/SUSv4) makes it equally valuable to programmers working on other UNIX platforms.

The Linux Programming Interface is the most comprehensive single-volume work on the Linux and UNIX programming interface, and a book that's destined to become a new classic.

Michael Kerrisk: Michael Kerrisk has been using and programming UNIX systems for more than 20 years, and has taught many week-long courses on UNIX system programming. Since 2004, he has maintained the man-pages project (http://www.kernel.org/doc/man-pages/), which produces the manual pages describing the Linux kernel and glibc programming APIs. He has written or co-written more than 250 of the manual pages and is actively involved in the testing and design review of new Linux kernel-userspace interfaces. Michael lives with his family in Munich, Germany.