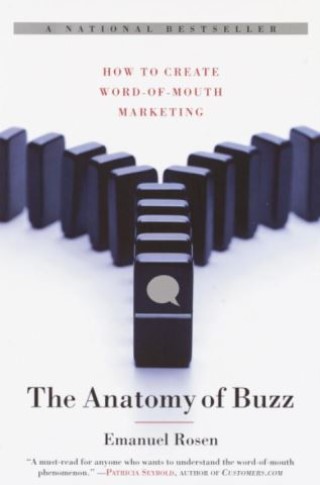 The Anatomy of Buzz

A groundbreaking guide to creating the word-of-mouth magic that cuts through the skepticism and information overload of today's consumers, and drives sales-and profits-to new heights.

What turns a "sleeper" into a box-office bonanza or catapults a just-released book to the top of bestseller lists? How do people decide which car to buy, which fashions fit the image they seek, and even which movie to see? Despite the daily assault of advertising and other traditional marketing strategies, statistics show that consumers are overwhelmingly persuaded by word of mouth-the recommendations of friends and the "buzz" that develops in the marketplace. As Newsweek recently proclaimed, "Buzz greases the great conveyor belt of culture and commerce, moving everything from movies to fashions of the body and mind faster and faster."

In The Anatomy of Buzz, former marketing VP Emanuel Rosen pinpoints the products and services that benefit the most from buzz-a universe that embraces everything from high-tech equipment to books, various consumer and entertainment products to legal and other support services-and offers specific strategies for creating and sustaining effective word-of-mouth campaigns. Drawing from interviews with more than 150 executives, marketing leaders, and researchers who have successfully built buzz for major brands, Rosen describes the ins and outs of attracting the attention of influential first users and "big-mouth" movers and shakers. He also discusses proven techniques for stimulating customer-to-customer selling-including how companies can spread the word to new territories by taking advantage of customer hubs and networks on the Internet and elsewhere.

Recent surveys show that 58 percent of young people rely to some extent on others when selecting a car, 53 percent of moviegoers follow the recommendations of friends, and 65 percent of the people who bought a Palm organizer were inspired by the enthusiasm of others. With The Anatomy of Buzz, business leaders have what they need to start the buzz and reignite excitement about a product or service stalled in a holding pattern, or launch a new product into the stratosphere.